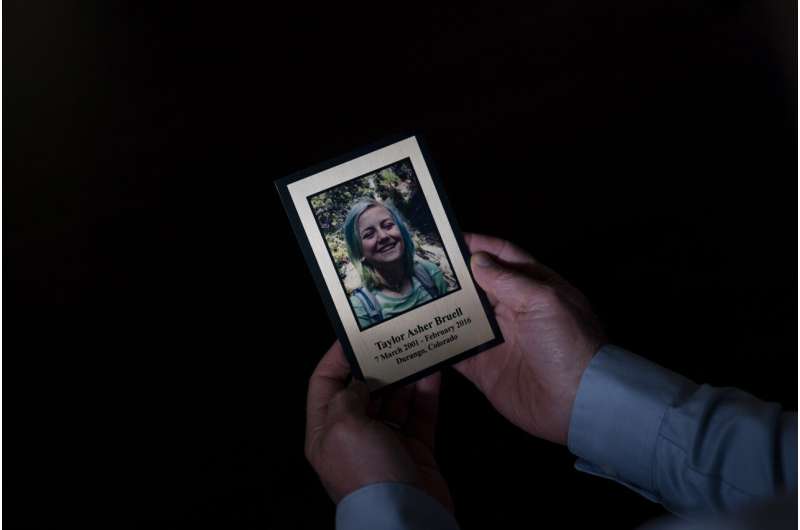 As Benito Luna-Herrera teaches his 7th grade social studies classes, he is on alert for signs of inner turmoil. And there is so much of it these days.

One of his 12-year-old students felt her world was falling apart. Distance learning had upended her friendships. Things with her boyfriend were verging on violent. Her home life was stressful. “I’m just done with it,” the girl told Luna-Herrera during the pandemic, and shared a detailed plan to kill herself.

Another student was typically a big jokester and full of confidence. But one day she told him she didn’t want to live anymore. She, too, had a plan in place to end her life.

Luna-Herrera is just one teacher, in one Southern California middle school, but stories of students in distress are increasingly common around the country. The silver lining is that special training helped him know what to look for and how to respond when he saw the signs of a mental emergency.

Since the pandemic started, experts have warned of a mental health crisis facing American children. That is now playing out at schools in the form of increased childhood depression, anxiety, panic attacks, eating disorders, fights and thoughts of suicide at alarming levels, according to interviews with teachers, administrators, education officials and mental health experts. 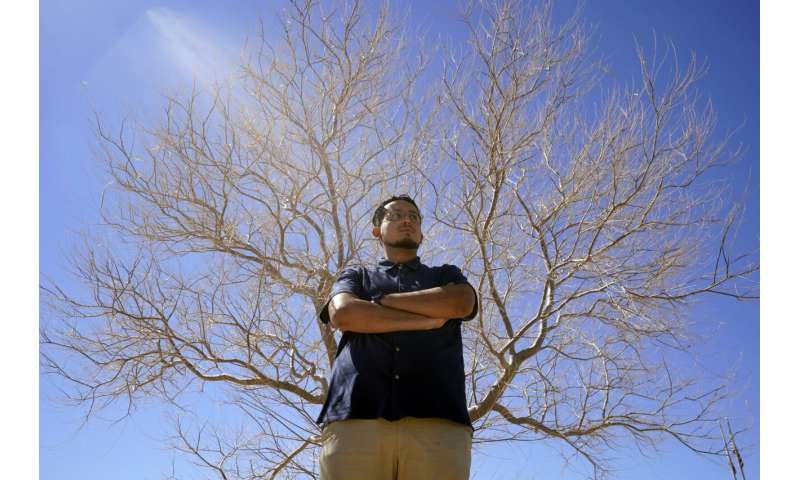 In low-income areas, where adverse childhood experiences were high before the pandemic, the crisis is even more acute and compounded by a shortage of school staff and mental health professionals.

Luna-Herrera, who teaches in a high poverty area of the Mojave Desert, is among a small but growing number of California teachers to take a course called Youth Mental Health First Aid. It teaches adults how to spot warning signs of mental health risks and substance abuse in children, and how to prevent a tragedy.

The California Department of Education funds the program for any school district requesting it, and the pandemic has accelerated moves to make such courses a requirement. The training program is operated by the National Council for Mental Wellbeing and available in every state.

“I don’t want to read about another teenager where there were warning signs and we looked the other way,” said Sen. Anthony Portantino, author of a bill that would require all California middle and high schools to train at least 75% of employees in behavioral health. “Teachers and school staff are on the front lines of a crisis, and need to be trained to spot students who are suffering.”

Experts say while childhood depression and anxiety had been on the rise for years, the pandemic’s unrelenting stress and grief amplified the problems, particularly for those already experiencing mental health issues who were cut off from counselors and other school resources during distance learning. 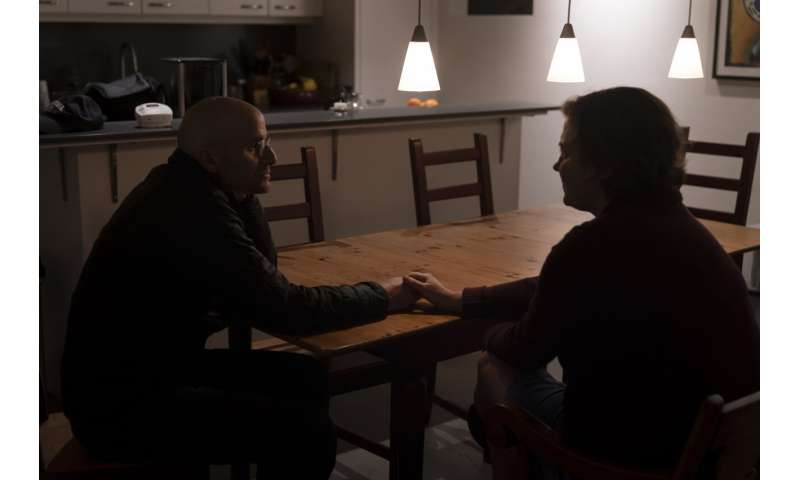 For children, the issues with distance learning were not just academic, said Sharon Hoover, professor of child psychiatry at the University of Maryland School of Medicine and co-director of the National Center for School Mental Health.

Child abuse and and neglect increased during the pandemic, according to Hoover. For children in troubled homes, with alcoholic or abusive parents, distance learning meant they had no escape. Those who lacked technology or had spotty internet connections were isolated even more than their peers and fell further behind academically and socially.

Many children bounced back after the extended isolation, but for others it will take longer, and mental health problems often lag a stressor.

“We can’t assume that ‘OK we’re back in school, it’s been a few months and now everyone should be back to normal.’ That is not the case,” said Hoover.

Returning to school after months of isolation intensified the anxiety for some children. Teachers say students have greater difficulty focusing, concentrating, sitting still and many need to relearn how to socialize and resolve conflicts face-to-face after prolonged immersion in screens. 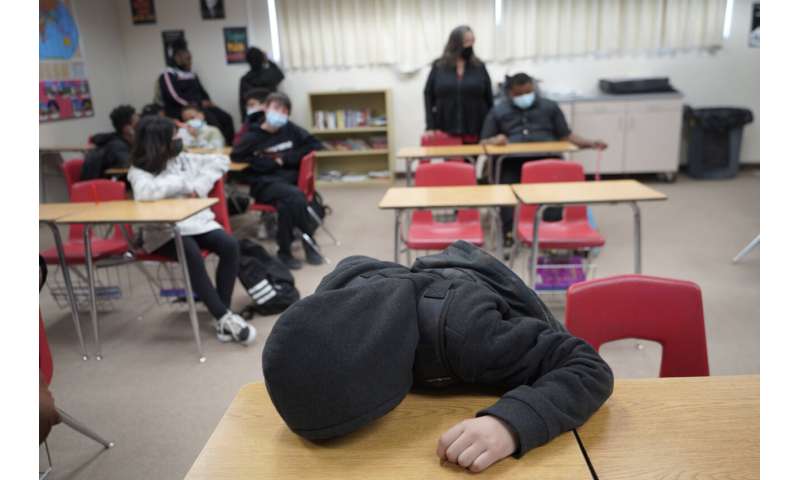 Kids expected to pick up where they left off but some found friendships, and their ability to cope with social stress, had changed. Educators say they also see a concerning increase in apathy—about grades, how students treat each other and themselves—and a lot less empathy.

“I have never seen kids be so mean to each other in my life,” said Terrin Musbach, who trains teachers in mental health awareness and other social-emotional programs at the Del Norte Unified School District, a high-poverty district in rural Northern California. “There’s more school violence, there’s more vaping, there’s more substance abuse, there’s more sexual activity, there’s more suicide ideation, there’s more of every single behavior that we would be worried about in kids.”

Many states have mandated teacher training on suicide prevention over the last decade and the pandemic prompted some to broaden the scope to include mental health awareness and supporting behavioral health needs.

But school districts nationwide also say they need more psychologists and counselors. The Hopeful Futures Campaign, a coalition of national mental health organizations, last month published a report that found most states are struggling with mental health support in schools. Only Idaho and the District of Columbia exceed the nationally recommended ratio of one psychologist per 500 students.

In some states, including West Virginia, Missouri, Texas and Georgia, there is only one school psychologist for over 4,000 students, the report says. Similarly, few states meet the goal of one counselor per 250 students. 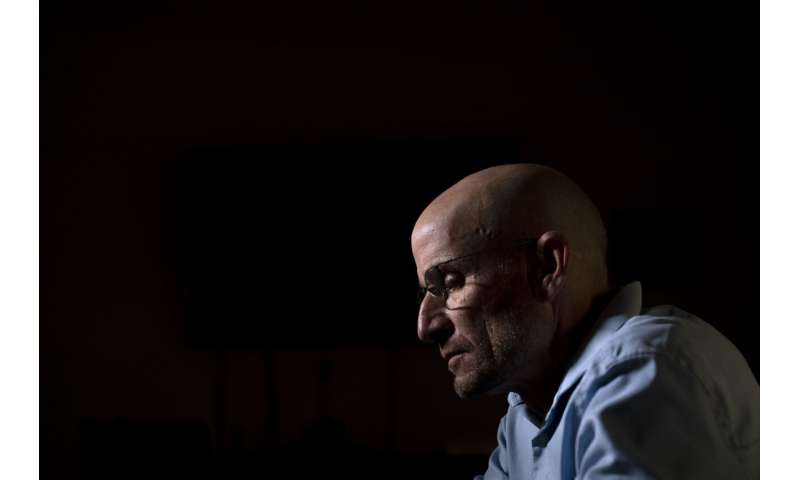 Since California began offering the Youth Mental Health First Aid course in 2014, more than 8,000 teachers, administrators and school staff have been trained, said Monica Nepomuceno, who oversees mental health programming at the California Department of Education.

She said much more needs to be done in the country’s largest state, which employs over 600,000 K-12 staff at schools.

The course helps distinguish typical adolescent ways of dealing with stress—slamming doors, crying, bursts of anger—from warning signs of mental distress, which can be blatant or subtle. 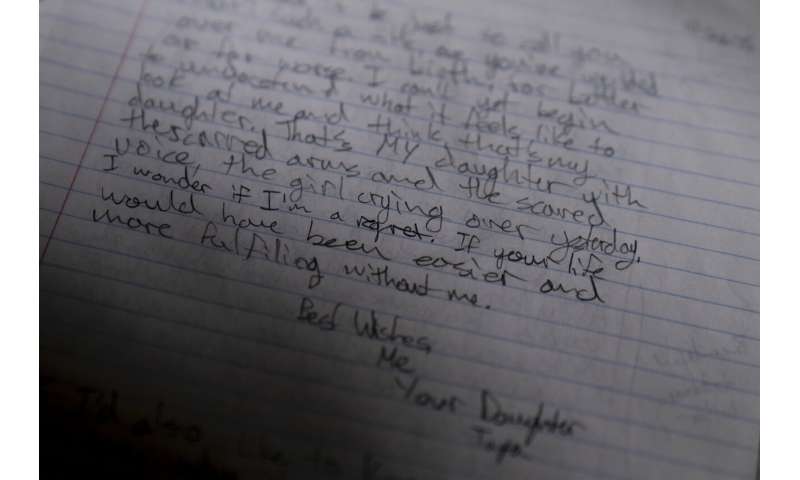 Red flags include when a child talks about dying or suicide, but can be more nuanced like: “I can’t do this anymore,” or “I’m tired of this,” said Tramaine El-Amin, a spokesperson for the National Council for Mental Wellbeing. More than 550,000 K-12 educators across the country have taken the Youth Mental Health First Aid course since it launched in 2012, she said.

Changes in behavior could be cause for concern—a child who stops a sport or activity they were passionate about without replacing it with another one; a typically put together child who starts to look regularly unkempt; a student whose grades plummet or who stops handing in homework; a child who eats lunch alone and has stopped palling around with their friends.

After noticing something might be wrong, the course teaches the next step is to ask the student without pressuring or casting judgment and letting them know you care and want to help.

“Sometimes an adult can ask a question that causes more harm than good,” said Luna-Herrera, the social studies teacher at California City Middle School, a two-hour drive into the desert from Los Angeles.

He took the course in spring 2021 and two weeks later put it to use. It was during distance learning and a student had failed to show up for online tutoring but he spotted her chatting online on the school’s distance learning platform, having a heated dispute with her then-boyfriend. Luna reached out to her privately. 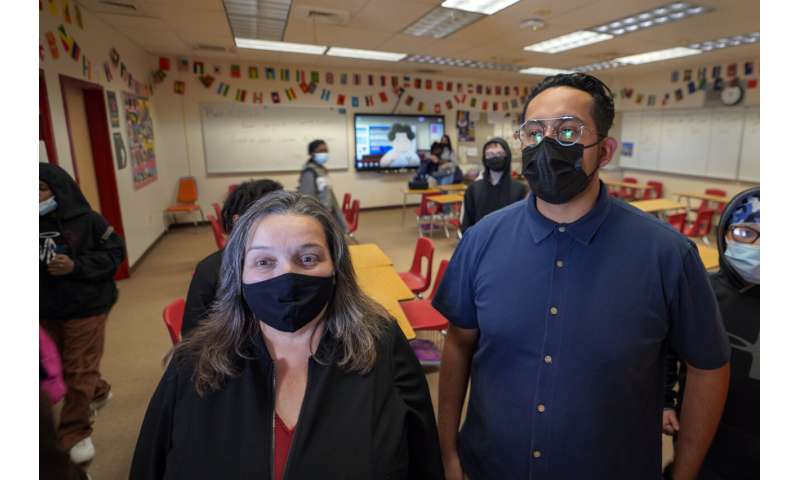 “I asked her if she was OK,” he said. Little by little, the girl told Luna-Herrera about problems with friends and her boyfriend and problems at home that left her feeling alone and desperately unanchored.

The course tells adults to ask open-ended questions that keep the conversation going, and not to project themselves into an adolescent’s problems with comments like: “You’ll be fine; It’s not that bad; I went through that; Try to ignore it.” What might seem trivial to an adult can feel overwhelming for a young person, and failure to recognize that can be a conversation stopper.

The 12-year old told Luna-Herrera she had considered hurting herself. “Is that a recurring thought?” he asked, recalling how his heart started racing as she revealed her suicide plan.

Like CPR first-aid training, the course teaches how to handle a crisis: Raise the alarm and get expert help. Do not leave a person contemplating suicide alone. As Luna-Herrera continued talking to the girl, he texted his school superintendent, who got the principal on the line, they called 911 and police rushed to the home, where they spoke to the girl and her mother, who was startled and unaware.

“He absolutely saved that child’s life,” said Mojave Unified Superintendent Katherine Aguirre, who oversees the district of about 3,000 students, the majority of whom are Latino and Black children from economically disadvantaged families. 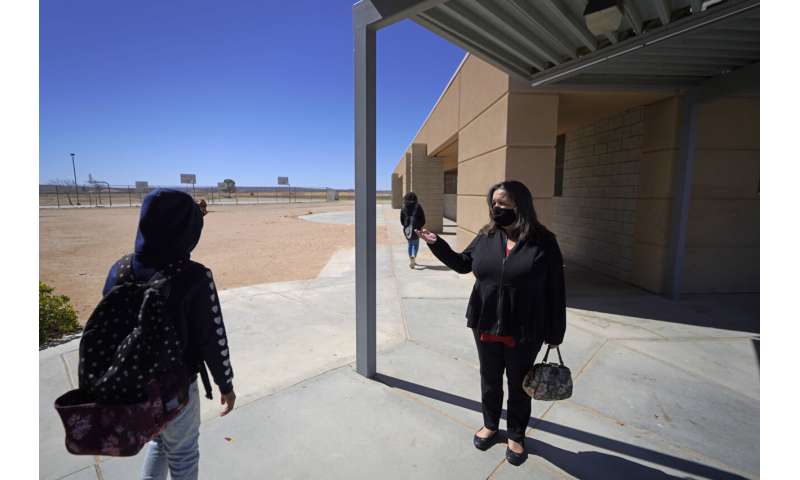 Aguirre recognized the need for behavioral heath training early in the pandemic and through the Department of Education trained all of her employees, from teachers to yard supervisors and cafeteria workers.

“It’s about awareness. And that Sandy Hook promise: If you see something, say something,” she said.

That did not happen with 14-year-old Taya Bruell.

Taya was a bright, precocious student who had started struggling with mental health issues at about 11, according to her father, Harry Bruell. At the time, the family lived in Boulder, Colorado where Taya was hospitalized at one point for psychiatric care but kept up the trappings of a model student: She got straight As, was co-leader of her high school writing club and in her spare time taught senior citizens to use computers.

For a literature class, Taya was assigned to keep a journal. In it, she drew a disturbing portrait that showed self-harm and wrote about how much she hated her body and was hearing voices she wanted to silence. 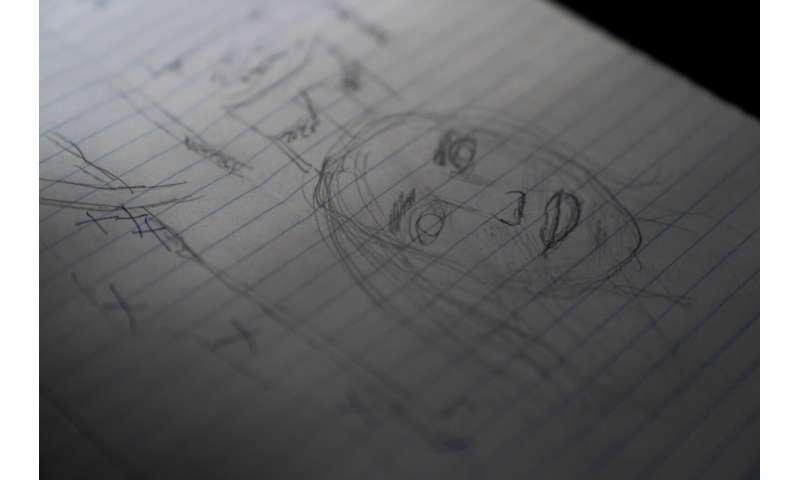 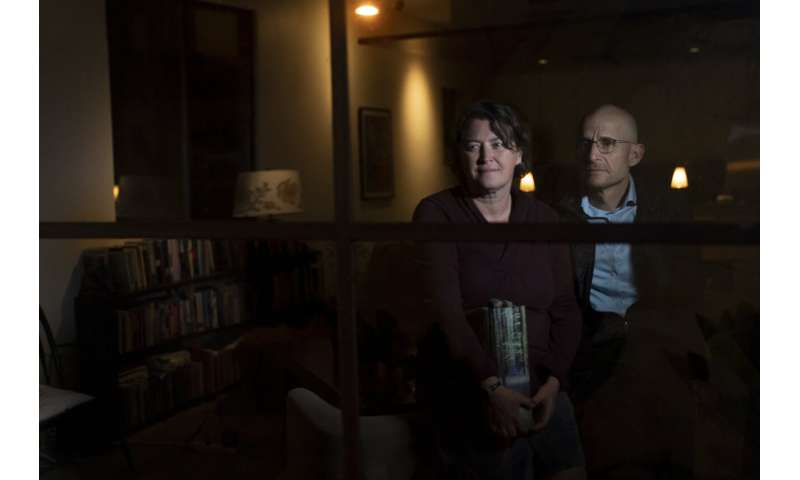 Her teacher read the assignment and wrote: “Taya, very thorough journal. I loved reading the entries. A+”

Three months later in February 2016, Taya killed herself. After her death, Taya’s parents discovered the journal in her room and brought it to the school, where they learned Taya’s teacher had not informed the school counselor or administrators of what she had seen. They don’t blame the teacher but will always wonder what if she had not ignored the signs of danger.

“I don’t think the teacher wanted to hurt our daughter. I think she had no idea what to do when she read those stark warning signs in Taya’s journal,” said her father, who has since relocated with the family to Santa Barbara, California.