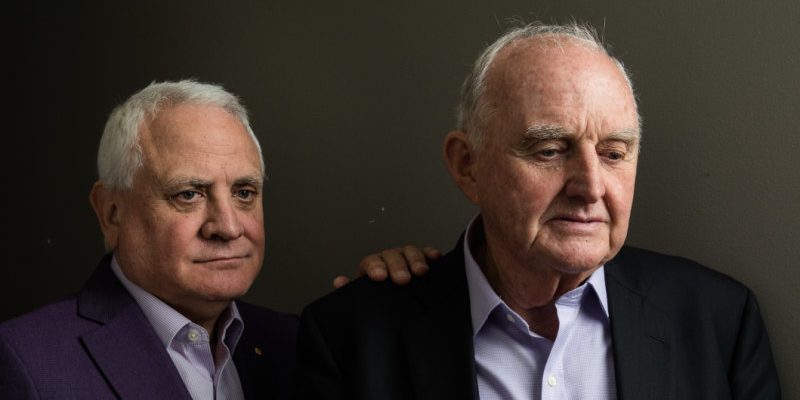 Tony King's wife Lyn was "a very industrious sort of woman" and, he discovered on a holiday with their grandchildren to Disneyland, "much braver" than him.

"She went on all the wild rides while I waited at the bottom," the former chief executive of the Australian Jockey Club says, laughing. "But then she complained about having a sore back." 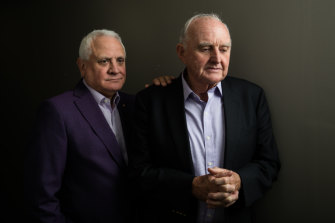 Daniel Goulburn and Tony King lost both of their wives to pancreatic cancer. Credit:Janie Barrett

The couple's eldest daughter had heard of older people getting gallstones from being too ambitious with theme park rides, so Lyn made a trip to the doctor on their return to Australia. An MRI scan revealed something more serious: pancreatic cancer.

"I didn't even know what a pancreas was," King admits.

In July 2017 – seven months after her diagnosis – Lyn died, surrounded by her family. She was 70. 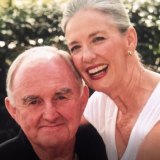 Four years earlier, Daniel Goulburn, OAM, had been similarly stumped when told by doctors that his wife Michelle had pancreatic cancer. "People think about cancer on their skin or in their brain … where even is your pancreas? How big is it?"

When Michelle passed away in August 2014, aged 57, she had undergone multiple procedures, 10 rounds of chemotherapy, and 13 of radiation. But she had also been on many family holidays and seen her second daughter walk down the aisle.

"A lot of people say we were really lucky," Goulburn says. "We had 16 months. It's normally just a few months, sometimes only weeks."

The pancreas is a small gland behind the stomach, responsible for producing insulin as well as enzymes that help the body to digest proteins and fat.

Pancreatic cancer has a 9.8 per cent five-year survival rate, meaning only one in 10 people live for five years after their diagnosis. Most people who are diagnosed have a life expectancy between six and 12 months.

We had 16 months. It's normally just a few months, sometimes only weeks.

Breast cancer has a five-year survival rate of 90 per cent and 96 per cent if the cancer has not spread outside the breast.

In a fundraising campaign for the GI Cancer Institute, scheduled to coincide with Pancreatic Awareness Month in November, King and Goulburn have joined with fellow widowers –  retired opthalmologist Dr Frank Cheok, OAM, and former Olympic yachtsman and mining executive Mark Bethwaite, AM – because, as they see it, pancreatic cancer's high mortality rate means they are the visible survivors of the disease.

"We're all members of an exclusive club that we didn't want to join," says King. "We're all widowers of this terrible disease." 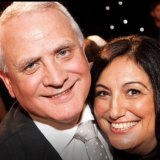 Daniel Goulburn, pictured with his wife Michelle, who died in August 2014.

It is estimated that in 2019 there will be 3599 new cases of pancreatic cancer diagnosed in Australia, making it only the 11th most commonly diagnosed cancer in the country. However, in the same period, 3061 Australians will die from the disease: the fifth-highest death toll.

Chantrill has been working in pancreatic cancer research for a decade and says the symptoms of pancreatic cancer – abdominal pain, changes in bowel habits, a yellow or jaundiced complexion – can often be mistaken for other health problems. The risk factors including smoking, being overweight, and a genetic disposition are also not well known.

Both King and Goulburn remark that their wives' cancers were only discovered by chance. For Michelle Goulburn, a pre-diabetic, it was a spike in her blood sugar that alerted doctors.

"I look back now and know that symptoms of pancreatic cancer existed," says Daniel Goulburn. "Possibly 18 months prior to her diagnosis: sore lower back, loss of appetite – looking back, she had it all."

"It's an awareness campaign born out of our initial complete ignorance," King adds.

Early detection of pancreatic cancer is key, says Chantrill. Most diagnoses are made "too late". If the tumour is discovered before it has blocked the bile duct, a surgery called the Whipple procedure can be performed to remove the head of the pancreas, increasing a person's survival rate after surgery to roughly 25 per cent. Chantrill is planning to lead a clinical trial into a new form of treatment, combining immunotherapy with chemotherapy prior to surgery, next year.

"Once you actually detect it, you need to treat it," Goulburn says. "And in order to treat it, to make the seven months into three years, we need clinical trials."

After his wife's death,  Goulburn, who is president of Sydney's Wolper Jewish Hospital foundation, immersed himself in advocacy work, becoming chair of the Australian Pancreatic Cancer Alliance and a member of the World Pancreatic Cancer Coalition's steering committee.

"What has been the success with [funding] breast cancer trials?" Goulburn asks. "It's been the survivors. It's the women who stand up there and say 'we can't let other families go through this'. But with pancreatic cancer, there's too few survivors and the families are so traumatised because it's such a short period of time. It's a shock."

For King, it is his first time speaking publicly about losing Lyn, whose brother, former prime minister Paul Keating, also appears in the campaign. "We feel we have a responsibility to make people aware of it," he says. "If you get one person to see a doctor with their symptoms, it's worthwhile."