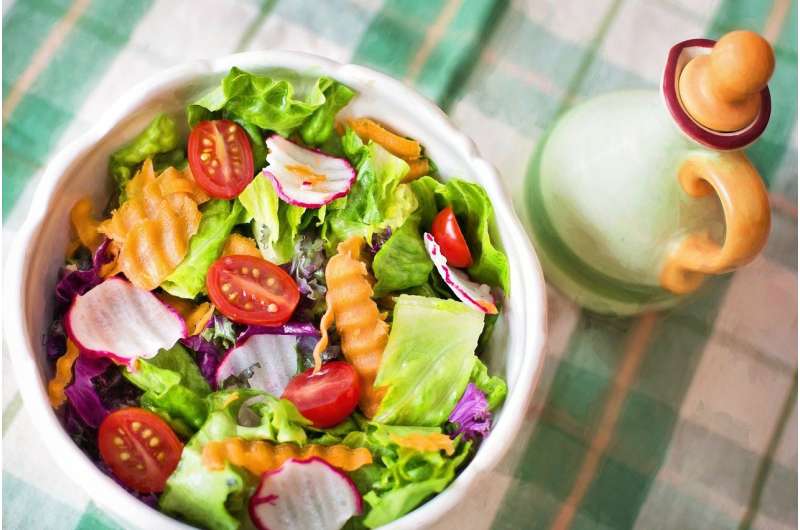 A new study has shown that streams of water carrying sound and microscopic air bubbles can clean bacteria from salad leaves more effectively than current washing methods used by suppliers and consumers. As well as reducing food poisoning, the findings could reduce food waste and have implications for the growing threat of anti-microbial resistance.

Salad and leafy green vegetables may be contaminated with harmful bacteria during growing, harvesting, preparation and retail leading to outbreaks of food poisoning which may be fatal in vulnerable groups.

Because there is no cooking process to reduce the microbial load in fresh salads, washing is vital by the supplier and the consumer.

Washing with soap, detergent bleach or other disinfectants is not recommended and the crevices in the leaf surface means washing with plain water may leave an infectious dose on the leaf. Even if chemicals are used, they may not penetrate the crevices.

In this new study, published in the journal Ultrasound in Medicine and Biology, scientists used acoustic water streams to clean spinach leaves, then compared the results with leaves rinsed in plain water at the same velocity.

Professor Tim Leighton of the University of Southampton, who invented the technology and led this research, explains: “Our streams of water carry microscopic bubbles and ultrasound down to the leaf. There the ultrasound sets up sound fields at the surface of the leaves, and within the leaf crevices, that attract the microbubbles towards the leaf and into the crevices. The ultrasound also causes the walls of the microbubbles to ripple very quickly, like the cilia hair cells around a bacteria itself, causing strong currents to move in the water around the bubble, and sweep the microbes off the leaf. In effect we make a ‘super-bacteria’ out of the air bubble itself: the bacteria and the biofilms, and the bubbles themselves, are then rinsed off the leaf, leaving it clean.”

The results showed that the microbial load on samples cleaned with the acoustic streams for 2 min was significantly lower six days after cleaning than on those treated without ultrasound. The acoustic cleaning also caused no further damage to the leaves and showed the potential to extend food shelf life, which has important economic and sustainability implications.

Improving how food providers clean fresh produce could have major role to play in combating the threat of anti-microbial resistance. In 2018 and 2019, there were fatal outbreaks of different strains of E. coli from romaine lettuce in the U.S. and Canada and samples from humans infected showed resistance to antibiotics.

University of Southampton Ph.D. student Weng Yee (Beverly) Chong, who was part of the research team added: “I am very grateful to Vitacress and EPSRC for funding my Ph.D. I came from an engineering background, and took Professor Leighton’s classes, but he told me that I could be a trans-disciplinary Ph.D. student, and become a microbiologist whilst increasing, my engineering skills. I am also very grateful to Sloan Water Technology that they have opened up their laboratories to use by students like me, so that I can keep working on my experiments. It is an exciting environment to work in because they are doing so much inventive work to combat the pandemic and infections as a whole.”

Previously as part of her Ph.D. Beverly has studied how the technology could reduce the infection risk to horses and other livestock through hay cleaning.