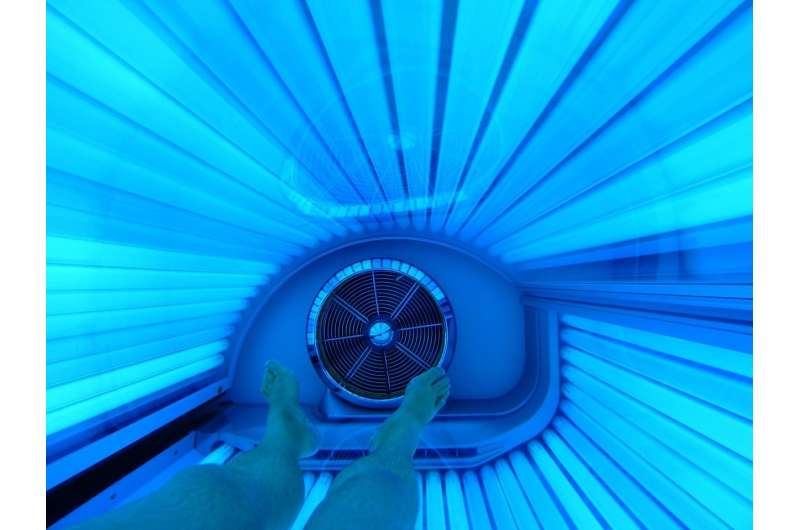 A ban of commercially available indoor tanning would substantially reduce deaths from melanoma, the most serious form of skin cancer, a study led by University of Manchester researchers has concluded. The study findings are being published to coincide with Melanoma Awareness Month.

By tracking the projected impact on the 618,000 18-year-olds living in England in 2019, the research team showed that a ban on indoor tanning would result in 1,206 fewer cases of melanoma and 207 fewer melanoma deaths over their lifetimes. In addition, it would result in 3,987 fewer cases of other more common types of skin cancer (squamous cell and basal cell carcinomas) which impose a major burden on both affected patients and the NHS.

The study, funded by the Manchester Cancer Research Centre, brought together a multidisciplinary team needed to address the financial, social and clinical aspects of the skin cancer project. The study, published in the British Journal of Dermatology, also examined the costs of a public information campaign at the same time as the ban, and the potential savings to the NHS.

And the policy would also save the NHS £700,000 resulting in a Net Monetary Benefit of £10.6m with a 99% likelihood that the ban with the information campaign would be cost-effective.

The actual impact of an indoor tanning ban, and the savings to the NHS that would accrue, would be far greater when benefits to individuals that started to use sunbeds over the age of 18 years were also factored in. The results build on previous studies of the effect of similar legislation on healthcare in North America, Europe and Australia and add to the growing body of evidence supporting a total ban on commercial sunbeds.

Though the International Agency for Research in Cancer in 2009 declared that the ultraviolet radiation from commercial indoor tanning devices causes cancer in humans, it is currently legal for anyone over the age of 18 to use indoor tanning devices in the U.K. Despite some evidence of decreasing use, the practice of indoor tanning is still widespread in many countries including the U.K.

In England, sunbed use is especially high in the north-west and in cities with greater social deprivation; its popularity is thought to partly explain the unusually high rates of melanoma seen among young women living in the north-west. It is also estimated there are around 62,000 children under 18 currently using sunbeds in England.

Paul Lorigan, a Professor of Oncology at The University of Manchester and Honorary Consultant Medical Oncologist at the Christie NHS Foundation Trust said: “If the NHS invested in a public health campaign to support the ban on sunbeds, we estimate that melanoma and other skin cancers would be significantly reduced, NHS resources would be saved and deaths averted.

“It is quite clear that melanoma and keratinocyte skin cancers have a significant impact on population health and healthcare budgets, and that a proportion are attributable to indoor tanning. Anyone who has used a sunbed increases their risk of melanoma by almost 60%.

“We show quite conclusively for the first time that banning indoor tanning supported by a public health campaign would be an efficient use of healthcare resources to reduce melanoma and other skin cancers in England.

“Our findings agree with calculations of future productivity losses that were caused by these diseases in the U.S. in mainly young people in 2015 after exposure to tanning devices. There the total economic losses amounted to over $US127 billion over the individuals’ lifetimes.”

The team analyzed the cost-effectiveness of the policy on the NHS using modeling to track the national cohort of 18-year-olds over their lifetimes. The mortality data specifically, was obtained from Office for National Statistics. They compared a nationwide ban on commercial indoor tanning combined with a public information campaign with the status quo of availability of commercial indoor tanning. And they calculated the expected costs, Quality Adjusted Life Years and the Net Monetary Benefit of a ban.

Professor Adele Green from The University of Manchester and the CRUK Manchester Institute added: “We already know that indoor tanning devices are strongly linked to melanoma and other skin cancers with resulting morbidity, mortality and increased healthcare costs.

“But policy-makers require robust economic evidence to inform decisions about a possible ban of such devices to mitigate these burdens. We feel we have succeeded in providing that evidence.”

Susanna Daniels, CEO at Melanoma Focus said: “This research is further evidence of the negative public health impact of sunbeds. I am thrilled that Melanoma Focus are supporting this project by funding the validation of UK costs of the melanoma diagnostic and treatment pathway.

“For individuals, sunbed use dramatically increases the risk of developing melanoma, which is the deadliest form of skin cancer. The rates of melanoma skin cancer are increasing in the UK yet 86% of cases are preventable. We strongly advise the avoidance of sunbeds.”

In 2018, Dr. Sarah Carlick was diagnosed with a lump in her collarbone area which was diagnosed as stage three malignant melanoma, over 6 years after she had a cancerous freckle excised.

As someone who had previously enjoyed spending time in the sun, she grew up without knowing how dangerous being in the sun—or using sunbeds could be, or what a devastating impact it would have on her health.

In the intervening years, she was able to run her training and consultancy business for safeguarding children and adults at risk and completed a doctorate degree in 2018 at Lancaster University. But just a day after her graduation in 2018, the doctors told her the cancer —which is one of the fastest growing —had returned and was traveling up the right side of her neck.

“I was utterly heartbroken and absolutely terrified when I found out the cancer had returned after I had been so long in remission, ” she said.

She had a further operation in January 2019 at The Christie Hospital followed by 12 months of grueling targeted therapy. And the therapy took its toll: of the many side effects she endured the extreme fatigue was probably the worst.

She was so tired that at times she was wheelchair bound and was forced to take long periods of time off from her work which in turn affected her physical and mental health.

She said: “The treatment completely put my life on hold; it was very tough. But it was worth it as the therapy was a preventative measure to stop the melanoma returning.”

Sarah finished the treatment just before lockdown in 2020, but it took her over 2 years to return to normality, now describing herself as 99% recovered. But because of what she had been through, she is now a passionate campaigner on the dangers of UV light, sunbathing and use of sunbeds.

She said: “I wasn’t aware of the seriousness of sun protection growing up and I regularly got sunburnt as a child, as well as being a user of sunbeds in the family home as a young adult. But now I find it hard to watch anyone going anywhere near a sunbed because I know just how dangerous it is.

“I appreciate tanning salons are small businesses and that people’s livelihoods depend on it. But there’s so much ignorance about what happens to your body when you literally fry yourself. The industry needs to take responsibility for the danger they are subjecting their clients to. Like the dangers of smoking are now highly visible on cigarette packets, there also needs to be a highly visible warning in the salons themselves.”

She added: “There are lots of factors that can contribute to skin cancer, many of which are preventable, and I would encourage everyone to regularly use sun cream, cover up and stay out of the sun especially between the hours of 11 am and 3 pm.