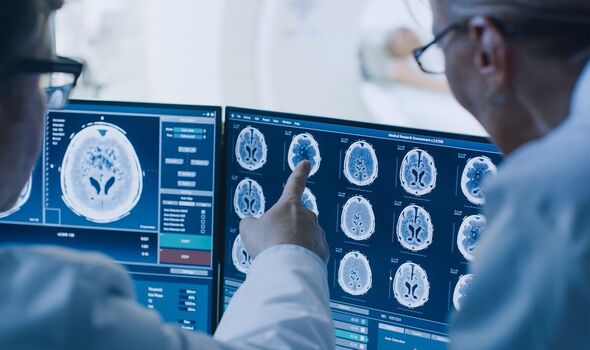 Cancer Research UK released the analysis to mark its 20th anniversary as it celebrated investing £5.4 billion into studies since 2002. In the early 2000s, around 310 in every 100,000 people died from cancer each year in the UK – today the figure is around 260.

Mortality rates for some cancers have fallen even more. The proportion of people who survive for at least five years after a lung cancer diagnosis has doubled from just 10 percent to 20 percent.

Cervical cancer death rates have dropped by a third – and researchers hope to see further improvements thanks to the success of the HPV vaccine.

“From developing life-saving drugs to influencing Governments, every penny of the money donated has helped to revolutionise what we know about cancer and saved many lives.”

Ms Mitchell said that despite the hard-won gains there was “still a long way to go” and the UK lags behind comparable countries on cancer survival.

The pandemic also had a devastating impact on early diagnosis, screening programmes and treatment waiting times, which threatens to reverse this progress.

Ms Mitchell added: “By making cancer a priority, the government can help us build upon the amazing work of the last 20 years. Together, we can achieve our goal of beating cancer.”

The charity’s donations have funded the work of more than 3,000 researchers at 350 institutions.

Drugs linked to CRUK-funded research benefitted three-quarters of cancer patients treated by the NHS in England every year.

The charity has also played a key role in the development of screening programmes, symptom awareness campaigns and lobbying for government action to tackle the causes of cancer, such as the 2007 ban on smoking in public places.

And it has committed to spending at least £1.5 billion on research over the next five years.

CRUK research information lead Dr Samuel Godfrey said: “Discovery science has the power to transform society – indeed every major cancer treatment has been underpinned by it.

“There are still unanswered cancer questions that must be solved if we are to beat cancer, and discovery science will again provide the inspiration for solutions.

“This vital work depends on our fantastic fundraisers and we also urgently need buy-in and accountability from the Government. If we all work together, we can build a future free from the fear of cancer.”

Jayshree Jhala has been cancer-free for more than ten years after having a mastectomy for breast cancer.

The 85-year-old was diagnosed in 2006 following a mammogram and also underwent chemotherapy to cut the risk of the disease returning.

The drug she was treated with for five years, Tamoxifen, is a life-saving hormone therapy for breast cancer that was brought about with the help of CRUK.

It began as an accidental discovery in 1960s by scientists at pharmaceutical company ICI who were looking for a new emergency contraceptive.

After its development, CRUK scientists helped prove the drug’s effectiveness, paving the way for its widespread use.

Around three-quarters of women diagnosed with breast cancer now survive for at least 10 years.

Jayshree said: “I wanted to share my story because often the Asian community tends to hide their illness.

“For me, it was important to know that CRUK helped fund the development of Tamoxifen, because that in turn gave me the confidence to take this drug.

“Knowing it has been tested and approved by CRUK eased a lot of my questions and anxiety.”

Jayshree has been involved with CRUK since 2009 and supports the charity as an ambassador.

She added: “If you have any changes which are unusual for you, please do go and get checked. I live every day as if it were the last and tomorrow is a bonus.”