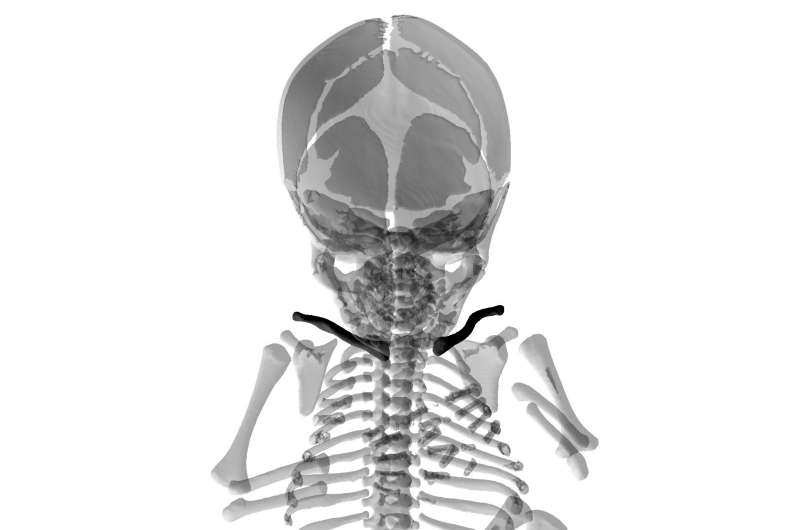 A team of researchers from Japan, Belgium and Switzerland has found evidence showing that the shoulder and associated collar bones in humans slow in growth prior to birth. In their paper published in Proceedings of the National Academy of Sciences, the researchers describe their study of CT scans from humans before and after birth and from other animals as a means for comparison.

Prior evidence has shown that the heads of human fetuses grow at a fast rate compared to other animals for most of the gestation period to accommodate the larger brain—but then it slows for a couple of months before birth. Scientists believe this became necessary to allow the head to fit through the relatively small birth canal. Prior research has also shown that humans have a narrow pelvis compared to other animals due to our upright stance. In this new effort, the researchers noted that during birth, human fetuses have difficulty with their heads and shoulders, and they wondered if the shoulders might also slow in growth prior to birth to allow for passage through the birth canal. Humans have very wide shoulders compared to most other species.

The researchers obtained 81 CT scans of humans both before and after birth, 61 scans of chimpanzees and 31 scans of Japanese macaques. They found that growth of the shoulders did slow before birth in humans and then picked up speed again after birth. They also found that shoulder growth in chimpanzees held steady throughout a pregnancy and shoulder growth in macaques increased steadily prior to birth and then slowed afterward.