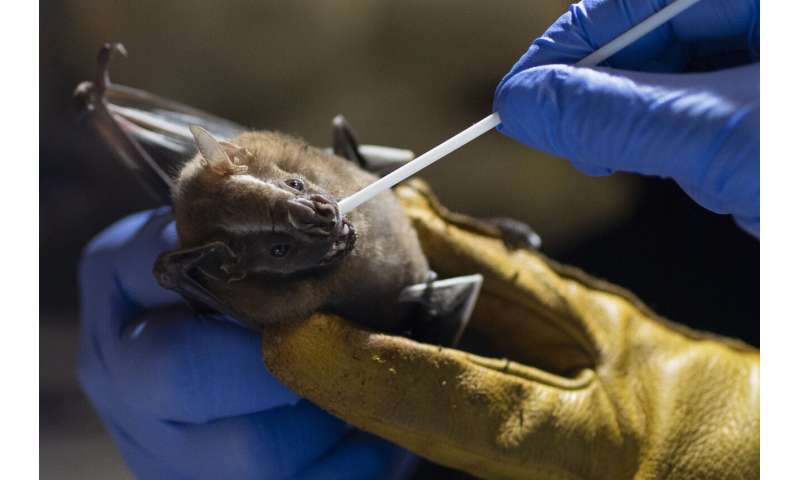 Night began to fall in Rio de Janeiro’s Pedra Branca state park as four Brazilian scientists switched on their flashlights to traipse along a narrow trail of mud through dense rainforest. The researchers were on a mission: capture bats and help prevent the next global pandemic.

A few meters ahead, nearly invisible in the darkness, a bat made high-pitched squeaks as it strained its wings against the thin nylon net that had ensnared it. One of the researchers removed the bat, which used its pointed teeth to bite her gloved fingers.

The November nighttime outing was part of a project at Brazil’s state-run Fiocruz Institute to collect and study viruses present in wild animals—including bats, which many scientists believe were linked to the outbreak of COVID-19.

The goal now is to identify other viruses that may be highly contagious and lethal in humans, and to use that information to devise plans to stop them from ever infecting people—to forestall the next potential global disease outbreak before it gets started.

In a highly connected world, an outbreak in one place endangers the entire globe, just as the coronavirus did. And the Brazilian team is just one among many worldwide racing to minimize the risk of a second pandemic this century.

To some, it might seem too soon to contemplate the next global outbreak, with the world still grappling with the devastating fallout of the ongoing one. But scientists say it’s highly like that, without savvy intervention, another novel virus will jump from animal to human host and find the conditions to spread like wildfire. 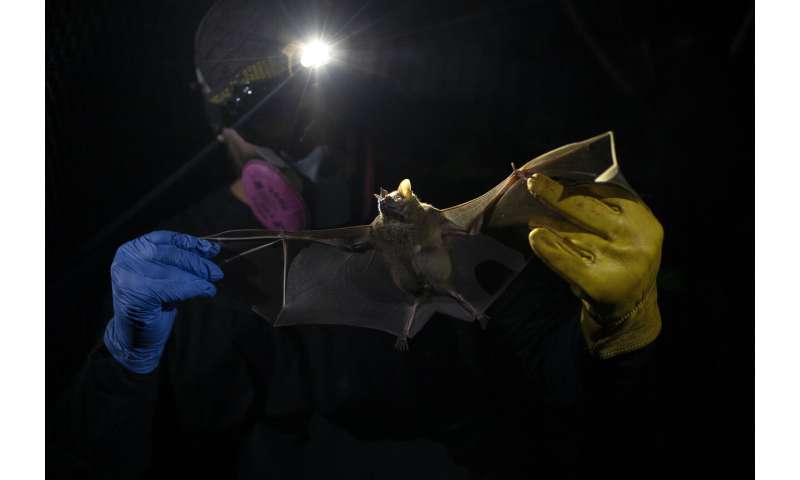 As this pandemic has shown, modern transport can disperse the pathogen to all corners of the globe in a matter of hours and spread easily in densely populated cities.

It’s not a question of if, but of when, according to Dr. Gagandeep Kang, an infectious diseases expert at Christian Medical College at Vellore in southern India.

She pointed to previous research that found India was among the most likely places in the world for such a “spillover” event to occur, due to population density and increasing human and livestock incursion into its dense tropical forests teeming with wildlife.

It’s no coincidence that many scientists are focusing attention on the world’s only flying mammals—bats.

Bats are thought to be the original or intermediary hosts for multiple viruses that have spawned recent epidemics, including COVID-19, SARS, MERS, Ebola, Nipah virus, Hendra virus and Marburg virus. A 2019 study found that of viruses originating from the five most common mammalian sources—primates, rodents, carnivores, ungulates and bats—those from bats are the most virulent in humans. 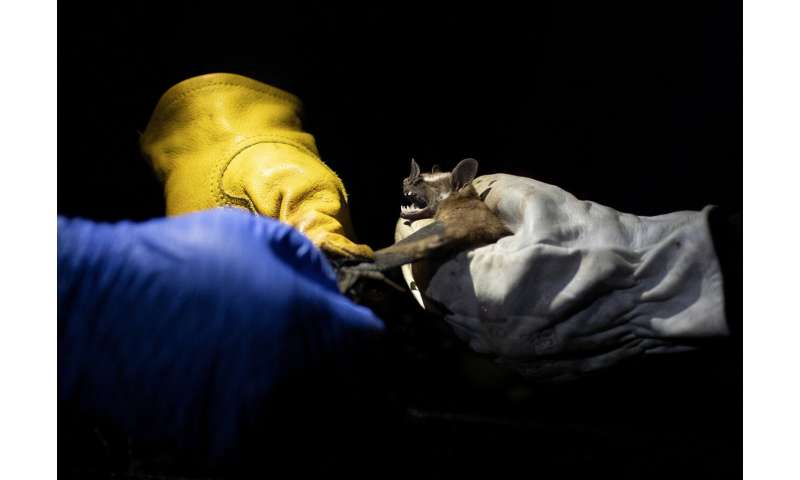 Bats are a diverse group, with more than 1,400 species flitting across every continent except Antarctica. But what many have in common are adaptations that allow them to carry viruses that are deadly in humans and livestock while exhibiting minimal symptoms themselves—meaning they are able travel and shed those viruses, instead of being quickly hobbled.

“The secret is that bats have unusual immune systems, and that’s related to their ability to fly,” said Raina Plowright, an epidemiologist who studies bats at Montana State University.

To get off the ground and sustain flight requires an incredible amount of energy, with bats’ metabolic rate increasing sixteen-fold, Plowright said. “You’d expect them to get cell damage from all that metabolic exertion,” she said.

But that doesn’t happen. Instead, bats are remarkably resilient, with many species living more than 30 years—highly unusual for such small mammals.

Plowright and other bat scientists believe evolutionary tweaks that help bats recover from the stress of flying also give them extra protection against pathogens. 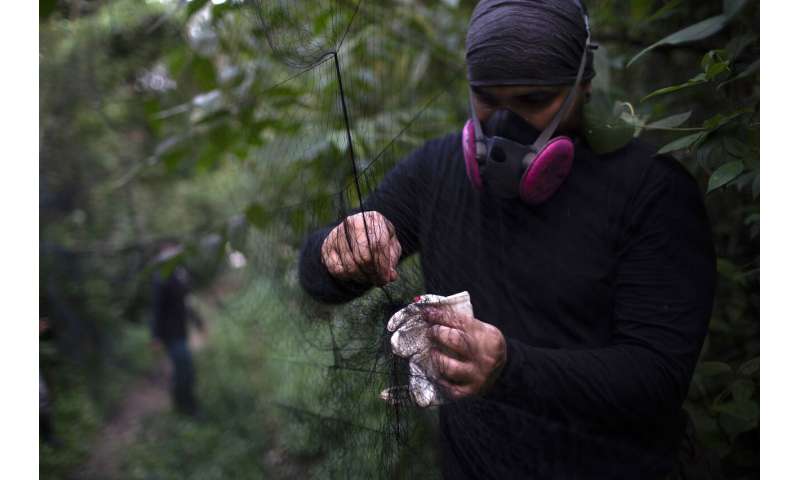 “Bats seem to have evolved a collateral benefit of flight—resistance to deal with some of the nastiest viruses known to science,” said Arinjay Banerjee, a virologist at McMaster University in Canada.

While scientists are still untangling the mystery, two leading theories are that bats may have evolved what Banerjee called “an efficient DNA repair mechanism” or that their bodies may tightly regulate inflammation triggers and not overreact to viral infections.

Probing the secrets of bat immune systems may help scientists understand more about when bats do shed viruses, as well as providing hints for possible future medical treatment strategies, he said.

Bats and other animals that carry pathogens don’t innately pose a risk to humans—unless conditions are right for a spillover event. “The virus has to come out of the host for us to get infected,” said Cara Brook, a disease ecologist at the University of California, Berkeley.

The bad news: Increasing destruction and fragmentation of habitats worldwide—especially biodiverse areas like tropical forests—means “we are seeing higher rates of contact between wildlife and humans, creating more opportunities for spillover,” she said. 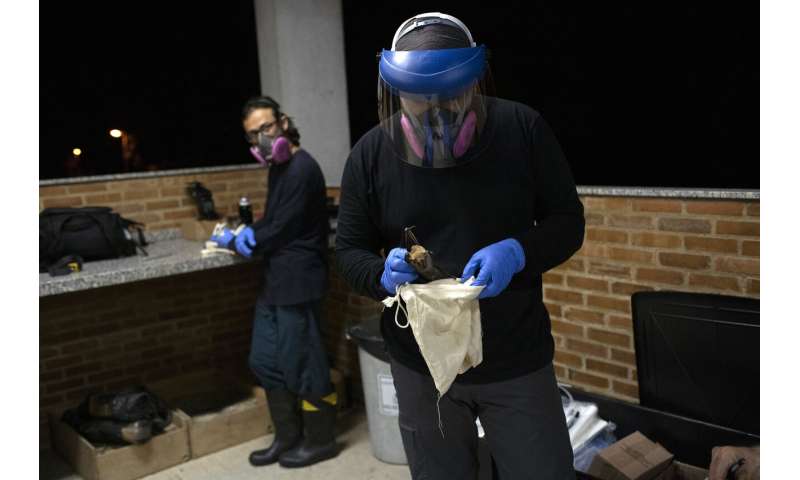 That’s why the Brazilian researchers chose Pedra Branca park. As one of the world’s largest forests within an urban area, it offers a constant interaction of wild animals with the thousands of humans and domestic animals in surrounding communities. The scientists are studying not just bats, but also small primates, wild cats and domestic cats in homes with confirmed COVID-19 cases.

Scientists and governments would stand a better chance at containing future outbreaks if they had faster notice of when and where they begin, said Ian Mackay, a virologist at Australia’s University of Queensland.

“Ongoing, constant, nonstop surveillance,” along the lines of the flu labs set up by the World Health Organization across the globe, could help researchers be better prepared, he said. He also suggested that labs for virus discovery could regularly sample waste water or materials from hospitals.

In India, a National Mission on Biodiversity and Human Well-Being has been pending since 2018 and will likely be launched next year. Abi Tamim Vanak, a conservation scientist at Ashok Trust for Research in Ecology and Environment in Bengaluru, said that a core part of the plan is to set up 25 sentinel surveillance sites across the country in both rural and urban areas.

“They will be the first line of defense,” he said. 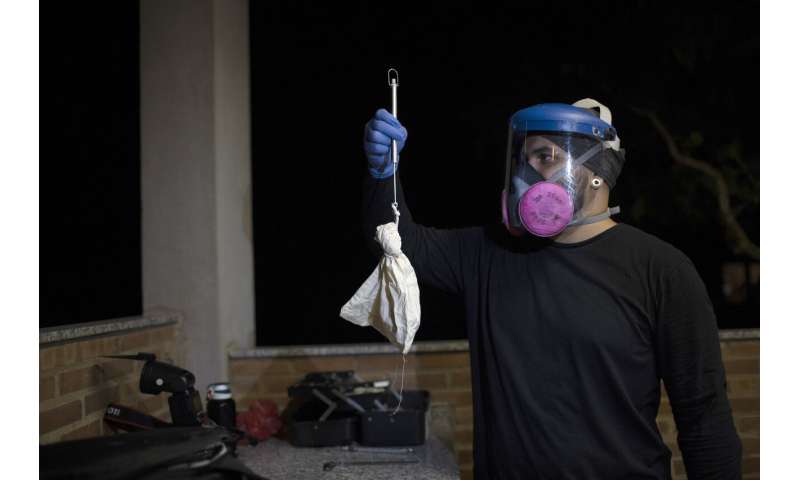 A varied patchwork of virus surveillance programs exists in several countries, but funding tends to wax and wane with the political climate and sense of urgency.

Among the most ambitious endeavors is the Global Virome Project, which aims to discover 500,000 new viruses over 10 years.

The U.S. Agency for International Development recently announced the launch of the $100 million STOP Spillover project, an effort led by scientists at Tufts University and including global partners to study zoonotic diseases in Africa and Asia.

One approach that won’t help, scientists say, is treating bats as the enemy—vilifying them, throwing stones or trying to burn them out of caves. 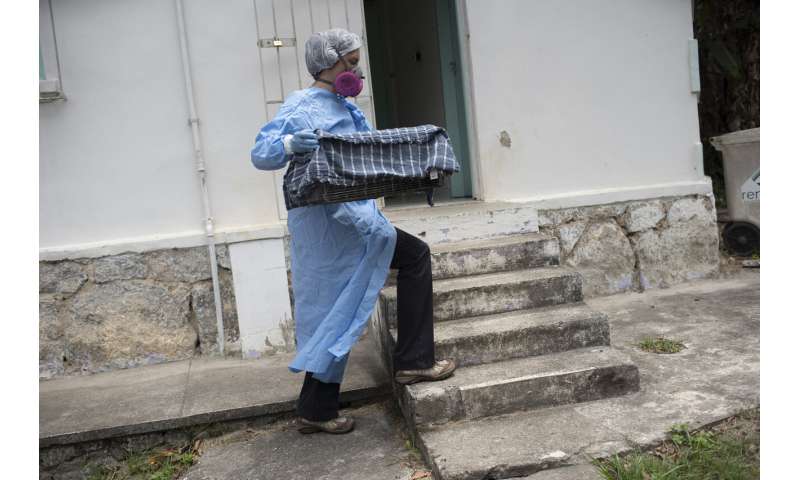 Scientists say those those tactics are likely to backfire.

An investigation by the U.S. Centers for Disease Control and Prevention and Ugandan health authorities found that, after a mining operation attempted to exterminate bats from a cave in Uganda, the remaining bats exhibited higher infection levels of Marburg virus. This led to Uganda’s most severe outbreak of Marburg hemorrhagic fever, caused by the virus, in 2012.

“Stress is a huge factor in upsetting the natural balance that bats have with their viruses—the more you stress bats, the more they shed viruses,” said Vikram Misra, a virologist at the University of Saskatchewan in Canada.

“People have a lot of misconceptions about bats. They’re nocturnal and look a little weird flying, and there’s a lot of literature and culture built around bats being scary,” said Hannah Kim Frank, a biologist at Tulane University. “But bats aren’t aggressive—and attacking bats doesn’t help control diseases.” 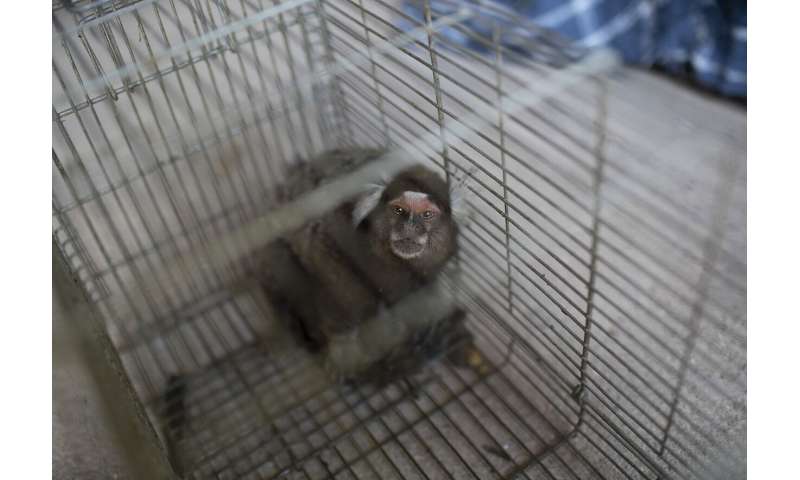 A better approach to minimize disease risk, Frank said, is simply to minimize contact between wild bats and people and livestock.

She suggested that research on when bats migrate, and when new pups are born, could inform decisions about when people should avoid certain areas or keep their livestock penned up.

“Cave gating—bat-friendly gates, built with iron crossbars—can keep humans out and allow bats to move freely,” said Kate Langwig, an infectious disease ecologist at Virginia Tech. “If we leave the bats alone, and don’t try to hurt or exterminate them, they are going to be healthier.” 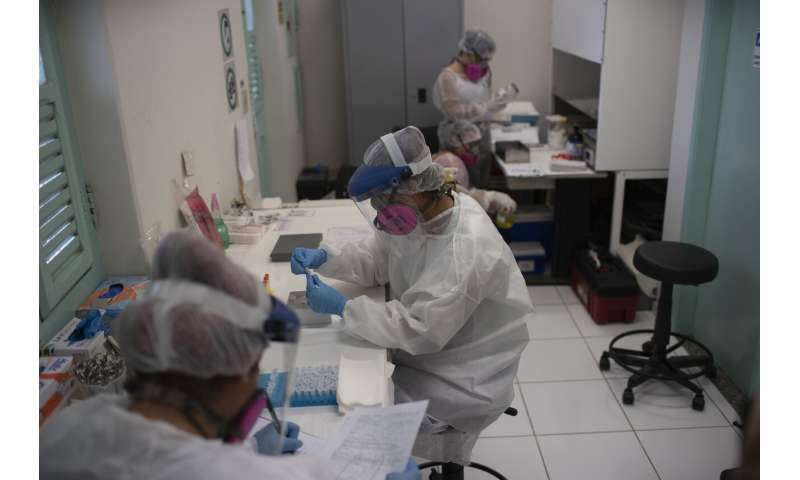 Perhaps the most significant factor bringing bats into more frequent contact with people and domestic animals is the destruction of habitat, which forces bats to seek out new foraging and roosting grounds.

In Australia, widespread destruction of winter flowering eucalyptus trees that provide nectar for fruit bats—known locally as “flying foxes”—prompted the bats to move into areas closer to human settlements looking for alternate meals, including to a suburb of Brisbane called Hendra.

There, the bats transmitted a virus to horses, which in turn infected people. First identified in 1994 and named Hendra virus, it is highly lethal, killing 60% of people and 75% of horses infected. 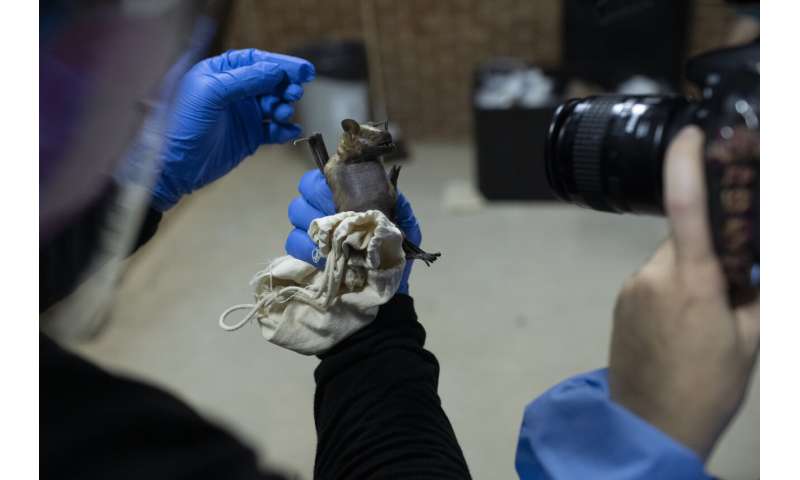 A similar chain of events took place in Bangladesh, when habitat destruction drove fruit bats into cities, where they spread Nipah virus, which causes severe encephalitis in humans, by licking date palm sap from collection barrels.

To potentially reverse the movement of bats, Montana State University’s Plowright and colleagues based in Australia are studying restoring the bats’ original habitat. 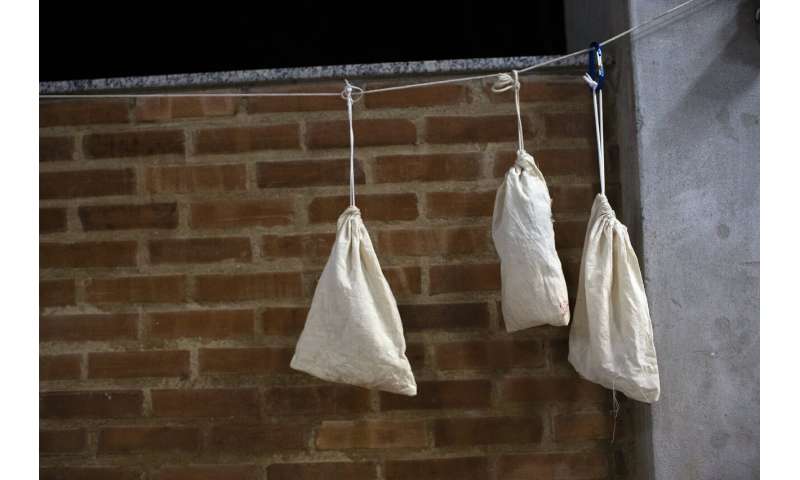 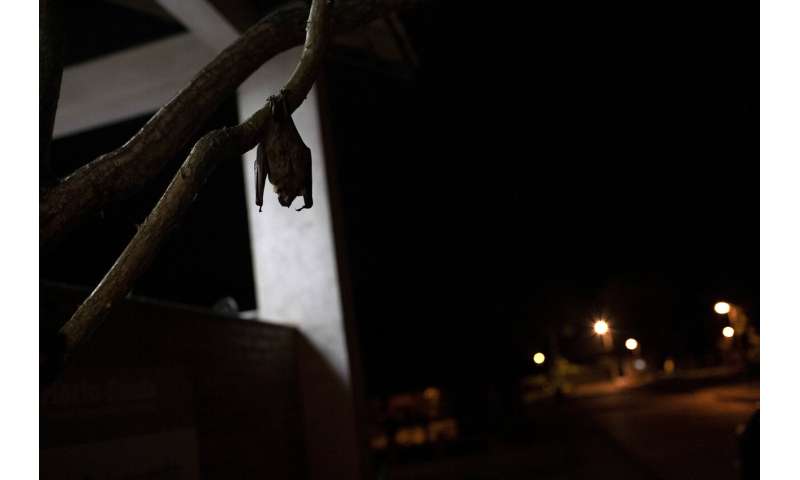 “Every city in Australia is full of fruit bats that lost their winter habitats,” she said. “The idea is to plant new forests and make sure they are away from places with domestic animals and people.”

Whether the goal is to curb the spread of known zoonotic diseases or to reduce the risk of new ones emerging as pandemics, the strategy is the same: Reduce contact between humans and wild animals.