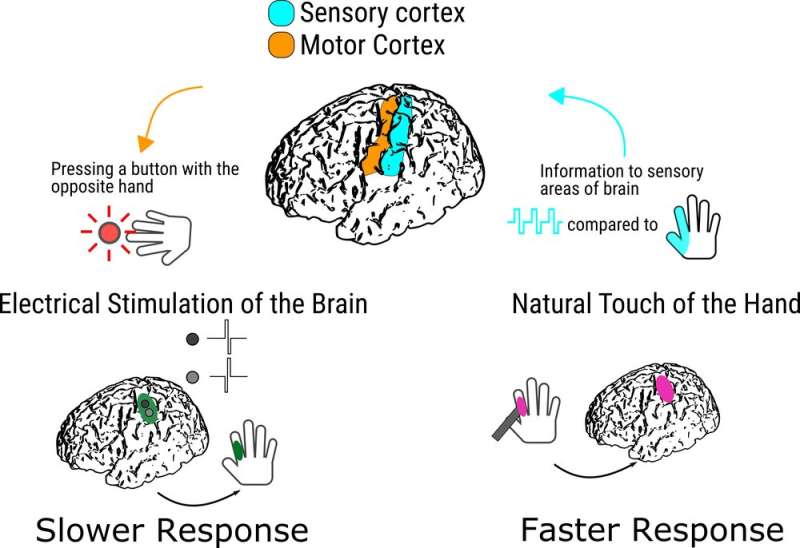 More than 5 million people in the United States are affected by limb loss or paralysis. Technological devices that directly interact with the brain, known as brain-computer interfaces, offer the potential to decode an individual’s thoughts and translate them into action using a robotic arm or a cursor on a screen. These neuroprosthetics can take the place of an amputated or paralyzed arm, for instance, helping the user take an action.

Much research in this field to date has focused on decoding brain signals—what is it that the person wants to do?

But there’s another equally important part of any real-world prosthetic system. It needs to be able to convey information in the other direction, too, back to the brain to provide feedback from the external world. Think about how challenging it would be to interact with the world in the absence of touch. Tasks such as lighting a match, picking up an egg and grasping a coffee cup become tremendously difficult.

At the University of Washington’s Center for Neurotechnology, our team is working out how best to engineer stimulation to the brain to restore tactile sensations that allow people to perform useful tasks. To this end, we are studying how people respond to sensation triggered by electrical stimulation of the brain. Our goal is to help devise a system that someday will allow someone who has lost the sense of touch to feel a loved one’s hand again.

Collaborating with neurosurgeons Jeffrey Ojemann and Andrew Ko, we rely on patient volunteers who generously allow us to carry out research while they are undergoing treatment for epilepsy.

To help localize the origin of a patient’s seizures prior to removing brain tissue to potentially help their epilepsy, Ojemann and Ko temporarily implant small, metal electrodes on top of and within the patient’s brain. These electrodes monitor the brain’s epileptic seizures so the neurosurgeons know where—and where not—to operate.

Our experiments use those same electrodes in two ways. We can record the electrical activity of the brain’s neurons. And we are also able to inject small amounts of electric current into specific parts of the brain. When we send a small burst of electricity to the touch-processing areas of the brain, the person experiences tactile sensations. In other words, when we activate particular neurons with electricity, the volunteer experiences it as if we were touching a particular part of their body.

We asked our subjects to press a button as quickly as possible using the hand opposite to where they felt the sensation. They were blindfolded to eliminate the potential for visual feedback that might confound our results.

What we discovered was surprising. Individuals responded more slowly to direct stimulation of their brain’s primary somatosensory cortex compared to a natural touch to their fingers. Even though an electric signal directly from the electrode in the brain bypassed all the peripheral nerves between the hand and head, the signal that traveled the longer journey up the ascending sensory nerves registered first.

This result held up even when we tested subjects again after a short break, suggesting that it cannot be explained solely as a novel sensation that the subjects needed time to learn.

Together, these studies demonstrate the complexities of stimulating the brain to replace natural tactile feedback. Future technologies and engineering strategies will need to take into account variability in touch sensation depending on how electrical stimulation is targeted in the brain.

Engineering around a sensory lag

By discovering a delay in how people respond to direct electrical stimulation of their brains, we have revealed potential limitations in how current engineered solutions perform. The delay might limit how well future sensory neuroprosthetic devices using these clinical electrodes can work.

Designers may need to account for a significant lag in artificial sensation relative to natural touch. For instance, if a user doesn’t receive feedback from touch sensors on a robotic hand quickly enough, and the overall system does not account for this delay in perception, someone attempting to pick up an egg with a robotic hand could apply too much pressure and crush it.

To improve reaction times and more broadly to enhance the utility of direct brain stimulation, we will need to take into account ongoing brain activity and tailor the electrical stimulation patterns for each person’s brain and the task at hand.

To achieve this goal, we have recently proposed a new type of brain-computer interface called a brain co-processor, which uses artificial intelligence to compute the best stimulation patterns for a task given current brain activity. Such an approach allows multiple electrodes to be used, possibly targeting multiple regions, and relies on co-adaptation with the brain to better approximate natural sensations.