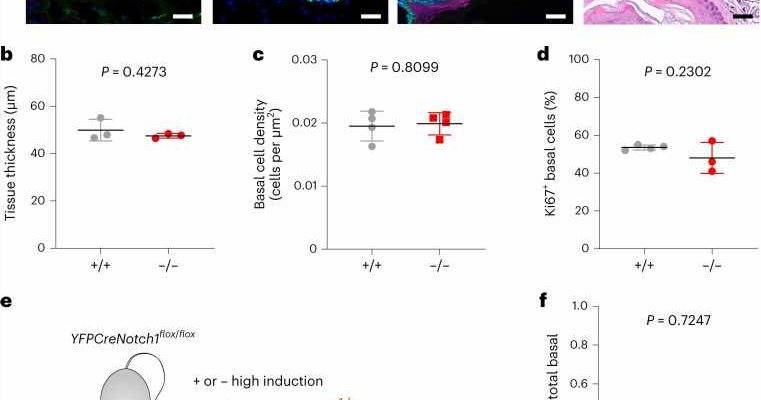 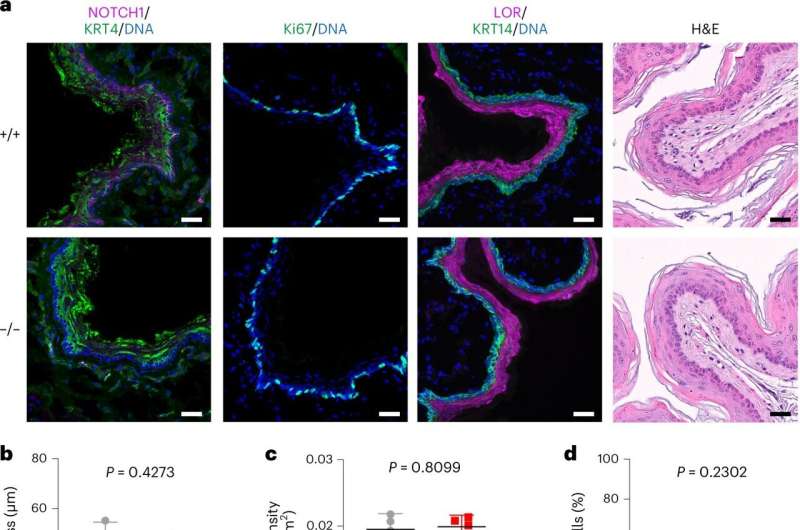 A protective mutation found in most cells in the human esophagus reduces tumor growth in mice, potentially highlighting new ways to prevent or treat cancer in similar tissues.

Researchers, from the Wellcome Sanger Institute and collaborators, visualized cells with mutations in the NOTCH1 gene, finding most cells in the human esophagus have these mutations above age 50. This is surprising, as very few esophageal cancers have NOTCH1 mutations and suggests NOTCH1 is an advantageous mutation.

The new study, published on January 19, 2023 in Nature Genetics, uncovered that the loss of NOTCH1 gives cells an advantage over their neighbors, enabling them to push out other cells, and take over normal tissue. The same mutation impairs the growth of tumors in mice.

Further research into why NOTCH1 mutations confer a protective effect could shed light on new ways to prevent the growth of cancer in the esophagus as well as in similar tissues, such as the mouth lining. Therapies that block the action of NOTCH1 may also have therapeutic potential in treating cancers, if the results are shown to be the same in humans.

Over time, all cells in the body acquire genetic mutations, and while the majority of these do not affect how the cell functions, some give an advantage that allows those cells to grow at a faster rate. Sometimes, mutations cause uncontrollable growth leading to cancer and the formation of tumors.

By middle age, the human esophagus evolves into a patchwork of mutated cells. While the majority of these mutations do not lead to cancer, if tumors do form, they can be hard to treat as symptoms appear when the cancer has started to spread.

Esophageal cancer is the sixth leading cause of cancer deaths globally, with more than 500,000 new cases diagnosed annually and an overall five-year survival rate below 30%. There are two types—esophageal adenocarcinoma and esophageal squamous cell carcinoma—with the latter accounting for approximately 85% of all cases worldwide. This type is less frequent in the U.K. and more common in Eastern Asia, and Southern and Eastern Africa.

While mutations in genes such as TP53 are found in almost all esophageal squamous cell carcinoma tumors, mutations in the NOTCH1 gene are relatively rare in these cancers despite being very common in normal esophagus tissue, suggesting NOTCH1 mutants may protect against cancer.

In this new study, researchers from the Wellcome Sanger Institute and collaborators genetically analyzed samples of normal esophageal epithelium from middle-aged and elderly donors and found frequent NOTCH1 mutations affecting both copies of the gene and inactivating its function.

Using mice models, the team found that cells containing a Notch1 mutation spread throughout the tissue but then reverted to near normal behavior. When tumors are formed by treating mice with a chemical from tobacco, Notch1 mutants spread over the normal esophagus but slowed tumor growth. In addition to this, a NOTCH1 blocking antibody reduced tumor growth.

NOTCH1 inhibitors are in clinical development for certain types of cancer. Understanding more about how NOTCH1 mutations function could help uncover new ways to prevent tumors from forming.

“Our study shows that the loss of function mutation in Notch1 is beneficial in that it takes over the esophagus but helps to slow the growth of potentially cancerous cells in mice. Our research highlights the importance of studying somatic mutations in both tumors and normal tissues to improve our understanding of their role in cancer development,” says Dr. Emilie Abby, first author from the Wellcome Sanger Institute.

“More than 9,200 people are diagnosed with esophageal cancer in the U.K. every year. Unfortunately, many patients present with later stage cancer, when the disease tends to be more advanced and harder to treat. This study presents new insights into the role that common NOTCH1 mutations may play in early cancer development, and raises important questions around how efforts to specifically target these alterations could be explored as new ways to prevent, detect and treat esophageal cancer in the future,” says Dr. Sam Godfrey, research information lead at Cancer Research U.K.

“The esophagus is a Darwinian battleground, with cells competing against each other for space, giving novel insight into how mutations change cell behavior. Studying these mutations can lead to a further understanding of how cancers develop and possibly hold the key to preventing the disease from happening, or developing new ways to treat it. esophageal squamous cell carcinoma is a devastating disease, with symptoms usually only developing when the cancer has already begun to spread. Further investigation of how positive mutations, such as those in NOTCH1, interfere with tumor growth could be the key to understanding how to prevent this cancer from forming at all in the future,” says Dr. Phil Jones, senior author from the Wellcome Sanger Institute.