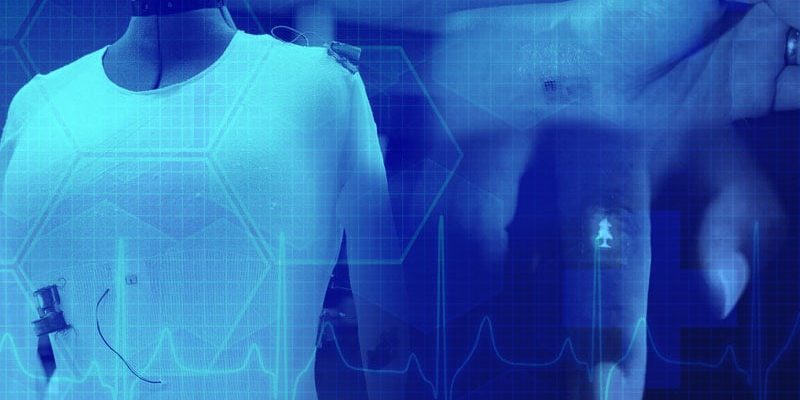 Editor’s note: This is the second in a two-part series on the future of wearable tech. Part one (read here) explores what future wearables will look like and what they will accomplish.

Pick up your smartphone. Yes, you’ve held it a thousand times, it’s like an extension of your hands. But let’s do an experiment: Grab it by both ends and stretch it out as far as it will go. Now twist it. Wrap it around your forearm. Cool, right? Now let it snap back.

Wait, what do you mean your phone won’t bend and stretch?

That little exercise in imagination illustrates what’s possible in the realm of wearables — electronic devices we wear close to or on our skin. Today, smartwatches and phones are still hard, inflexible blocks of plastic and metal. Tomorrow, all that will change.

“In wearables, flexibility, stretchability, and washability are all key requirements,” says Veena Misra, PhD, a professor of electrical engineering at North Carolina State University and director of the ASSIST Center, a federally funded research institute that develops wearables to aid health. 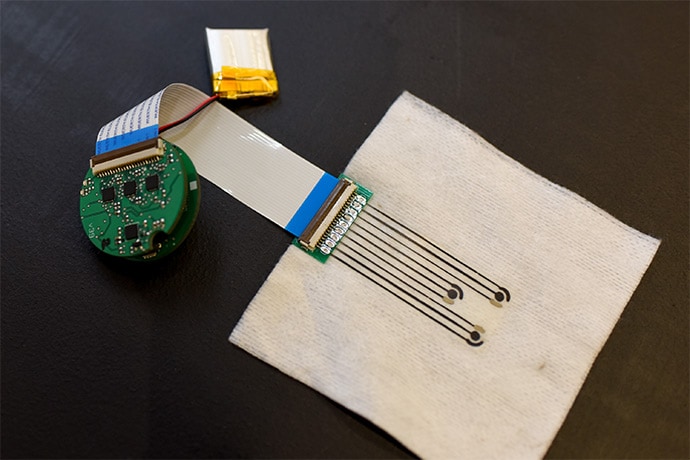 “We are seeing these kinds of developments across the board,” Misra says, “and you can track that in the number of [research] papers coming out in wearables. That number is just growing exponentially.”

We tend to think of wearables as fun consumer gadgets, but a growing school of thought says they will drastically improve healthcare — providing a vehicle for continuous, long-term monitoring to predict adverse events and closely track disease, improving treatments and health outcomes worldwide.

For that to happen, wearables must work seamlessly with our bodies. That means making conventionally hard, rigid devices and systems more like human skin — soft, bendable, and stretchable.

How does one manage that? By redesigning electronics at the molecular level, miniaturizing sensors, and creating unheard-of power sources to support what engineers call a skin-like “form factor.”

To coin a phrase, it ain’t science fiction. It’s happening as we speak, and the new products these advances will create — potentially starting in healthcare and crossing over to the consumer wellness market — could become as normal as that clunky, inflexible phone you can’t put down. Here’s how.

Why Does Form Factor Matter?

A wearable that conforms to your body is better in two crucial ways: It’s less obtrusive for the user, and it allows for a more reliable measurement.

“Sensors and sensor systems a lot of times suffer from mechanical mismatch,” says Alper Bozkurt, PhD, an electrical engineer, and Misra’s colleague, at NC State and ASSIST. “If you have soft tissue that’s moving around, but a rigid sensing device that’s not moving around, your measurement may not be reliable.”

That’s because all that extra banging around between the device and your body shows up as “noise” — meaningless information that can distort the measurement and may lead to false conclusions.

Then there’s the “human factor,” Bozkurt notes — the issue of compliance.

“One of the challenges is, we design things in the lab, test everything, and bring it to our medical operators, and they raise their eyebrows and say, ‘No, my patients are not going to wear this,'” Bozkurt says. “You cannot imagine a future for wearables without solving the compliance issue.”

People want a device that’s comfortable, doesn’t stick out, and requires little interaction, Bozkurt says. “We call it wear-and-forget.” You might compare this to wearing a Band-Aid — sure, you notice it occasionally, but mostly it fades into the background, without interfering with your daily tasks and without others even noticing it’s there.

A wristwatch may seem comfortable enough, but applications extend beyond what a wristwatch can enable, notes Michael Daniele, PhD, a fellow member of the NC State / ASSIST team, who studies soft nanomaterials to engineer devices that monitor, mimic, or supplement body functions.

Wearable devices are being developed to help patients and even treat them in ways “in which the patient’s comfort is a priority,” he says.

Take the use of electrodes and electronics in lower-limb prosthetic sockets as an example, he says. “Picture a few metal screws pressing into your limb that you are supporting all of your weight with, or picture filling your shoe with an array of rocks. That’s the state of wearables for such a user.”

OK, So How Do You Make Electronics Soft and Stretchy?

One way is to take hard things used to monitor health — like silicon chips — and make them so thin they become flexible. Among the first to demonstrate this kind of material technology in skin-like wearable devices was John Rogers, PhD, in 2011, in a landmark Science paper titled Epidermal Electronics.

“We’d been pretty active in that field for a number of years,” says Rogers, who at the time was at the University of Illinois and has since moved to Northwestern University. “But then we realized that even silicon — which most people think of as a very rigid, brittle rock-like material — can be made into forms and shapes, and at thicknesses that allow it to be bent and…even stretched.”

Rogers, whose team has several applications in development, uses an etching technique to shave off the surface of a semiconductor wafer.

“It turns out all the action in those integrated circuits is happening on that very-near-surface layer,” he says. “All of the silicon underneath is just serving as a mechanical support.”

That critical layer is then embedded into an elastic polymer matrix, Rogers explains, allowing them to design fully functioning systems that can bend, twist, and stretch.

Still others use a different approach, building electronic parts from scratch out of materials that are inherently soft and stretchy — polymers. This is the kind of work Stanford chemical engineer Zhenan Bao, PhD, does, using a range of polymers with conducting properties. 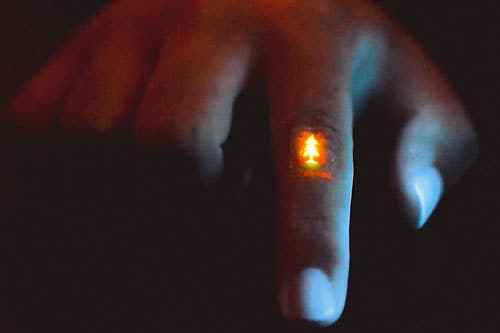 Zhenan Bao and her team at Stanford have created a polymer that lights up and can be used to build a flexible color display similar to what you’d see on any digital screen — except, unlike your cellphone, it holds up when stretched or flexed.

“In our work, we gain a fundamental understanding on how to design plastic molecules so that they have the functions and properties we want,” Bao says. For skin-like electronics, the plastics are designed — on a molecular level — to be conductive, elastic, and soft.

One of the newest creations out of Bao’s lab is a polymer that lights up, enabling skin-like visual displays. She imagines a skin patch with the display right on it, or going further, a telehealth appointment where the doctor could see and feel the texture of the patient’s skin via a three-dimensional, lifelike display. Example: One exam to check for severe water retention in heart failure patients is to press on the skin to see if it bounces back, Bao says. The patient would wrap an electronic sticker around their leg and press on it to generate a display for the off-site doctor. “The doctor would be able to feel on the display the texture of the skin that the patient would feel,” she says — from a remote location.

“Of course, this is still far away,” Bao notes. “But that’s what I think would be possible that can be enabled by skin-like displays and sensors.”

Sensors are improving too — that’s the part that interacts with whatever you’re trying to measure. Most commercial wearable sensors are mechanical (used to track physical activity) or optical (heartbeat, pulse oximetry). But chemical sensors are in development to measure internal markers in the body as well. These are critical in revealing the full picture of your health, says Joseph Wang, a doctor of science and professor of nanoengineering at the University of California, San Diego, who has published research on biosensors and wearable devices.

For example, a rise in lactate and drop in blood pressure can mean you have septic shock. Measuring potassium levels can give information about heart rate changes. And combining blood pressure and glucose measurements may reveal more about metabolic health than either one alone. “If you combine them, you get better evidence,” Wang says.

This is where the new tech can get really geeky. Chemical sensors are made from some of the most exotic nano materials, including graphene, carbon nanotubes, and gold nanoparticles, Daniele says. Some (glucose sensors in particular) use enzymes that bind to target molecules. Others use aptamers, short single strands of DNA or RNA.

Chemical sensors typically work with body fluid such as sweat, saliva, tears, or — as is the case for continuous glucose monitors — interstitial fluid (the liquid between the cells in your body). 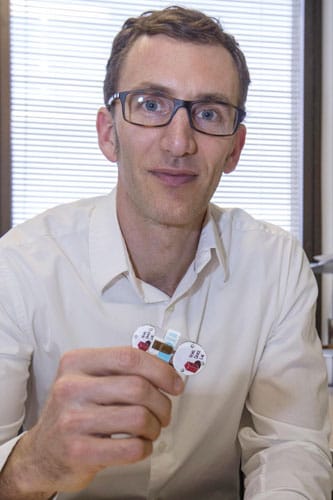 “Most of the things you want to measure in blood you’ll be able to do in interstitial fluid if you have the sensor technology,” says Jason Heikenfeld, PhD, a professor of electrical engineering at the University of Cincinnati. Just imagine having a full blood workup done by simply putting on a skin patch, no blood sample required.

Heikenfeld has also investigated sweat, which appears useful for measuring hormone levels (such as those that regulate stress, sex, and sleep) and prescription drug monitoring — that is, monitoring levels of a drug in the body and tracking how quickly it’s metabolized, he says.

Sweat sensors may also find a place in at-home tests, Heikenfeld says. “If there was a people’s choice award for bio fluids, sweat would win,” he says. “We don’t want to do blood, don’t want to drool in a cup, don’t want to mess with a urine stick. Tears, forget it. The test would be a simple patch you slap on your arm; collect some fluid, put it in an envelope, and mail it to a lab.”

This demand has prompted researchers from across the globe to develop batteries that can stretch and flex. To name just a few recent examples, Canadian researchers developed a flexible, washable battery that can stretch to double its original length and still function. In Singapore, scientists created a paper-thin biodegradable zinc battery that you can bend and twist and even cut with scissors — like any piece of paper — and it will still work. Still others are engineering batteries into long strips that can be used in smart clothing. 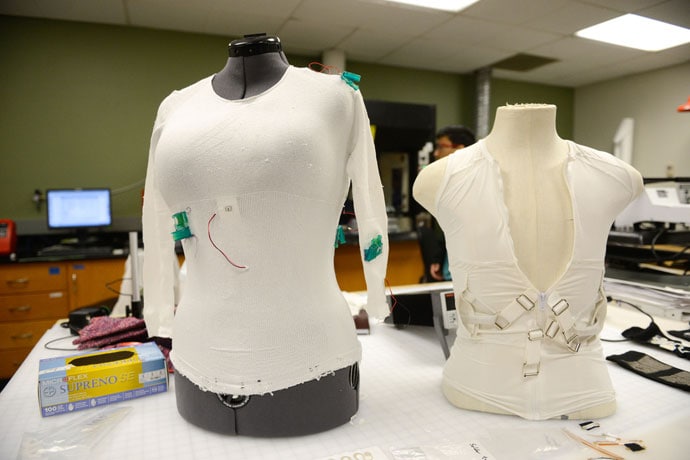 From the lab at NC State’s Wilson College of Textiles: A knitted shirt with integrated thermoelectric generators (left), and a shirt that measures the user’s ECG (electrocardiogram) and is powered by integrated piezoelectric films that harvest energy from chest expansion while breathing (right).

Another option is wireless power, Bao says. The battery does not need to be in the device — it can be in your clothes or your pocket and still power the sensors. Bao’s lab at Stanford has developed a sticker-like wearable called BodyNet that can be charged using radio-frequency identification, the same technology used to control keyless entry to locked rooms.

Still others — like Misra and her colleagues at ASSIST — are exploring battery alternatives like energy harvesting, or converting body heat, solar energy, or movement into power.

Just imagine: No more worrying about the battery dying, getting wet, or having to be recharged. “Your body is the battery,” Misra says.

For wearables to truly reach their full potential, all the parts must become more power-efficient and come together in a flexible, stretchable package, Misra says. They also must be designed in such a way that millions, if not billions, of people will want to wear them.

Just as important: Devices destined for the medical world must provide top-quality data. If the collected data isn’t gold standard, what good is it? And all that data needs to be turned into useful information. That’s where data analytics, machine learning, and artificial intelligence come in. “These are not unsolvable problems,” Misra says, “but they’re exciting problems that a lot of the community is working on.”

Bottom line: Our wearable future is well on its way.