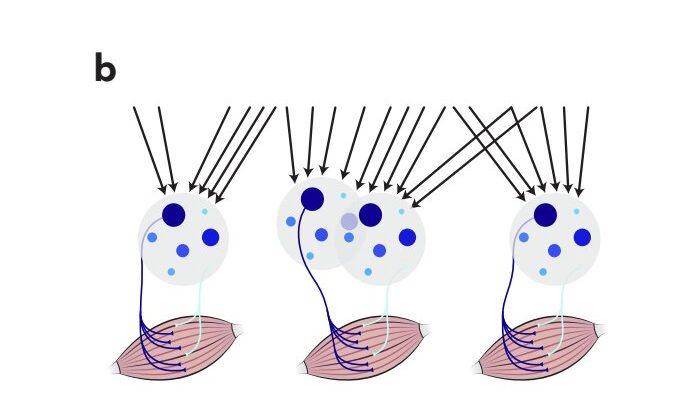 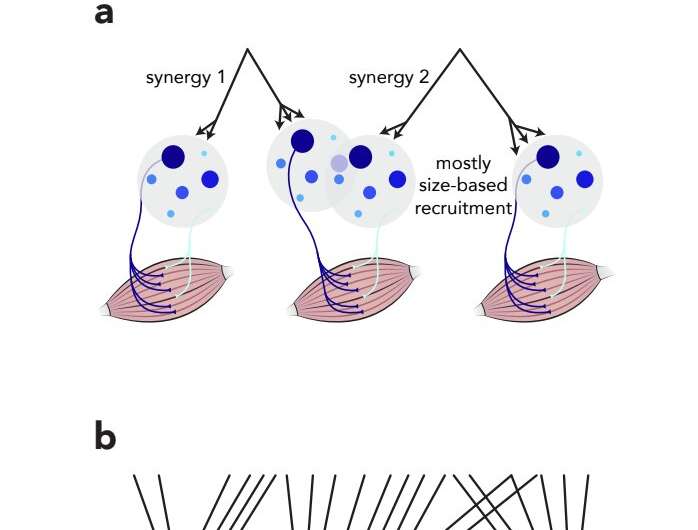 When humans and other mammals perform voluntary movements, a series of neural processes take place. The cerebral cortex, the outer region of the brain, sends signals to motor units (i.e., neurons) in the spinal cord, which in turn activate individual muscles.

Past neuroscience studies suggested that the cerebral cortex does not control individual motor units, but rather sends “common instructions” to a pool of motor units. In addition, experimental evidence supported the hypothesis that these motor units are recruited in a rigid, rather than adaptable, fashion.

Researchers at Columbia University have recently carried out a study aimed at investigating whether these two widely accepted ideas about the neural processes behind voluntary movements are reliable. Their findings, published in Nature Neuroscience, show that the cortex’s control of motor units might be far more flexible than past studies suggested.

“Consider a muscle in your leg, such as a quadricep, which straightens the leg and is used when running, cycling or skiing,” Mark M. Churchland, one of the researchers who carried out the study, told MedicalXpress. “That muscle is excited by many (let’s say 1,000) motor neurons that live in your spinal cord. A longstanding belief in our field is that those 1,000 neurons act together, in concert, in a very inflexible way.”

If motor neurons acted in tandem and in a rigid way, generating a particular force would always require the activation of the same number of neurons. This number of neurons would stay the same, irrespective of the specific activity that a human or animal is engaging in.

“So for example, let’s say that a certain force requires activating 500 neurons, generating this force would always uses the same 500 neurons, regardless of whether you are running, cycling, jumping, doing a chair pose in yoga, etc.,” Churchland explained.

“It wouldn’t have to be this way of course, as you could use one set of the total number when holding the chair pose, and a different set of 500 when jumping, but the idea is that this would make life complicated. It was thought that it would be better, simpler, and more straightforward if you always used the same 500.”

While this long-standing belief of the neural activity involved in voluntary movements appears simple and straightforward, it does not account for differences between individual motor neurons. In fact, neurons are now known to have specialized functions, meaning that they are better at some things than others.

“Some neurons excite muscle fibers that contract slowly and tend to be fatigue resistant,” Churchland said. “Other neurons excite different muscle fibers that contract quickly but also fatigue quickly. If the brain was working in an ‘optimal’ way, it would care about this. In other words, better to use the first kind of neurons during yoga and the second kind when jumping.”

While some neuroscientists entertained the possibility that the cerebral cortex activates different neurons depending on the type of physical activity we are engaged in, this had so far been widely perceived as a controversial hypothesis. The general belief remained that the neural processes involved in the movements of humans and mammals is not that flexible, as it prioritized simplicity over efficiency.

To test whether this is in fact true, Churchland and his colleagues developed a new isometric task (i.e., a task that involves the tightening and contractions of specific muscles or muscle groups). This task allowed them to reliably record the activity of the motor units of a rhesus macaque as it rapidly changed its movement patterns and behaviors.

“We observed the activity of motoneurons by recording from the muscles (where the motoneurons send their projections),” Churchland said. “We did so across a much greater variety of movements than had previously been examined and we observed more neurons simultaneously (all at the same time, during the same set of movements) than had been accomplished previously.”

The results gathered by the researchers are very interesting, as they disprove the well-established idea that motor neurons are activated together in a rigid way. In the future, the insight offered by this study could lead to new and important discoveries about how the brain and neurons in the spinal cord truly support voluntary movements.