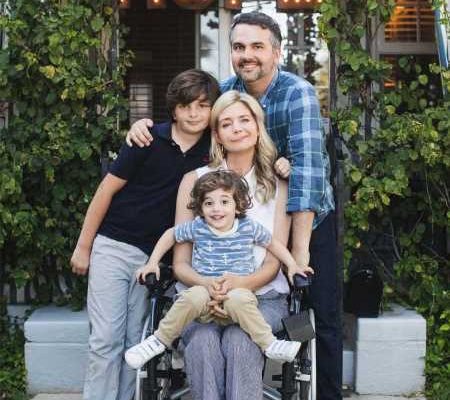 It was in 2008 and Katherine Wolf, who was just 26 years old and a mother of 6-month old James, felt dizzy and suddenly collapsed on her kitchen floor.

Unbeknownst to Katherine, she actually had an arteriovenous malformation, which exploded in her brain. Something, she tells PEOPLE, that would have been seen on an MRI before the traumatic incident.

When her husband Jay came home that afternoon, he found her and quickly dialed 911.

“One day it basically exploded in my brain stem and caused the massive stroke I had,” says Katherine, now 37. “In order to basically keep me alive, an incredible renegade surgeon operated on me for 16 hours. I was very, very close to death.”

And although Katherine says she is a “walking miracle” and lucky to be alive, she’s reminded every minute of what she’s lost.

Unable to walk without aid — and mostly in a wheelchair — Katherine can’t drive, sees double of everything, has no fine motor coordination in one hand, has many issues swallowing and is paralyzed on the left side of her face.

But Katherine, who spent two years in the hospital after the incident, never let these deficits define her or hold her back. Seven-and-a-half years after her stroke, she and Jay had another baby boy named John.

“I think I was waiting for my miracle though and wishing that I would make a full recovery,” says Katherine, “but I finally recognized that I did get the miracle. I lived. I’m here. I’m a firm believer in that if you have a pulse, you have a purpose. God spared my life and I’m here.”

That’s when her attitude changed and “real gratitude landed on me,” says Katherine, who says Jay is her full-time caregiver and biggest supporter.

She then decided to use her voice and disability to help others who are not so easily heard.

“Before this happened to me disabilities weren’t part of my life in any way,” says Katherine. ‘I didn’t have a disabled relative and there was no sense of needing to be an advocate for a community that is 20 percent of the world’s population right now.”

She added: “Disabled people are the largest minority group in the world.”

“Research shows that families with disabilities who are able to get significant rest, resourcing and deep relationship change how they feel about their situations,” she says. “Our camp seeks to offer those in abundance. We ultimately give them a community.”

Added Katherine: “At camp we have families who connect who live in Delaware and Illinois, and they’re texting daily, and they’re encouraging each other in their stories and in their really, really hard realities.”

She also wrote a book, Hope Heals: A True Story of Overwhelming Loss and an Overcoming Love, and has her second book called Suffer Strong: How to Survive Anything by Redefining Everything coming out in February 2020.

“I never in a million years would have broken out into the world of advocacy for disability, and yet it is my DNA,” says Katherine. “It’s who I am now and I wouldn’t have it any other way.”