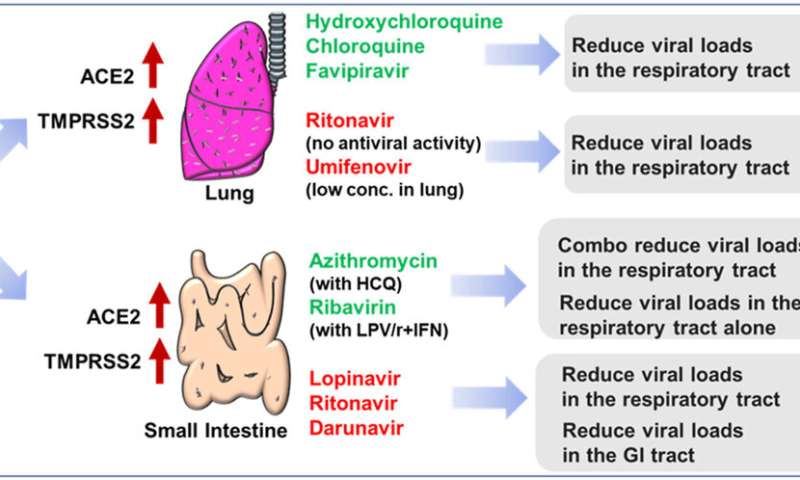 COVID-19 is caused by SARS-CoV-2, and has killed over 1,000,000 people around the world. It is impossible to create novel drugs against the coronavirus in a very short time, as drug development often takes years. Therefore, the best strategy is to find new antiviral uses from approved drugs.

Lopinavir, for example, originally approved as an anti-HIV drug, was reported to benefit SARS patients 17 years ago. However, lopinavir fails to reduce SARS-CoV-2 viral loads in COVID-19 patients, though it significantly inhibits SARS-CoV-2 replication in vitro.

A research team from the Shenzhen Institutes of Advanced Technology (SIAT) of the Chinese Academy of Sciences has proposed that anti-SARS-CoV-2 drug repurposing studies should pay more attention to the lung tissue distribution of antiviral drugs, according to the study published in British Journal of Pharmacology on May 18.

Recently, the team, in collaboration with researchers from Rutgers University, compared pharmacokinetics profiles of these drugs and their capabilities of reducing viral load in clinical trials. The work was published in European Journal of Pharmacology on October 6.

According to bulk RNA and single-cell RNA sequencing analysis, the researchers found that high expression of both angiotensin converting enzyme 2 (ACE2) and transmembrane Serine Protease 2 (TMPRSS2) made the lung and intestine vulnerable to SARS-CoV-2.

Hydroxychloroquine, chloroquine and favipiravir, which were highly distributed in the lung, were reported to reduce viral loads in respiratory tract of COVID-19 patients. Conversely, drugs with poor lung distributions, including lopinavir/ritonavir, umifenovir and remdesivir, were insufficient to inhibit viral replication.