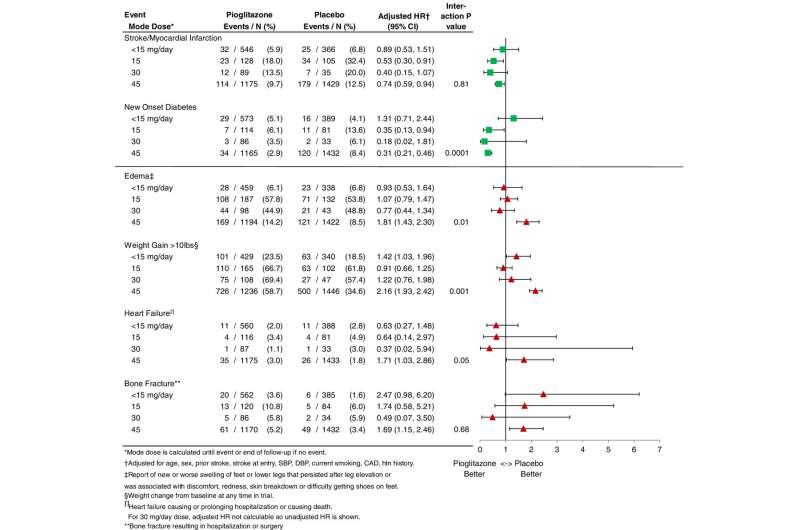 An insulin-sensitizing drug can benefit patients with insulin resistance at lower doses than has typically been prescribed, according to a study co-authored by Paresh Dandona, MD, Ph.D., SUNY Distinguished Professor of Medicine in the Jacobs School of Medicine and Biomedical Sciences at the University at Buffalo.

The study, titled “Efficacy of Lower Doses of Pioglitazone After Stroke or Transient Ischemic Attack in Patients With Insulin Resistance,” was published March 6 in the journal Diabetes, Obesity and Metabolism.

The study shows that low doses of pioglitazone used to treat diabetes in patients with insulin resistance may be preferable. In this study, patients had a history of previous stroke or transient ischemic attack (TIA).

Pioglitazone is a potent insulin-sensitizing drug with anti-atherosclerotic properties, but adverse effects of weight gain and edema have limited its use.

The researchers assessed the benefits and risks of lower versus higher doses of pioglitazone taken by participants in a secondary prevention trial who had a history of stroke.

Insulin resistance is a common condition that is closely related to older age, increasing weight and genetic predisposition. And it affects the majority of patients with Type 2 diabetes.

Insulin resistance is also an established independent risk factor for vascular disease, including stroke and myocardial infarction, and partly explains the association between diabetes and increased risk for these diseases.

Dandona says pioglitazone is currently used to treat patients with Type 2 diabetes. The most recent American Heart Association/American Stroke Association guidelines on secondary stroke prevention list the drug as a Class 2B recommendation in patients with stroke who have insulin resistance and elevated glycated hemoglobin.

Dandona says this recommendation stems directly from the findings of the Insulin Resistance Intervention in Stroke (IRIS) trial.

“Unfortunately, many clinicians are reluctant to use pioglitazone because of adverse effects, particularly weight gain and edema, and the drug is seldom prescribed by neurologists in their stroke patients,” he says.

Dandona says he instigated the reanalysis of the IRIS study because he has been prescribing pioglitazone over the past decade at a low dose of 15 milligrams with excellent results of glycemic control without the side effects of weight gain and edema.

“When I looked at the previous analysis of the IRIS trial, it occurred to me that the low dose may be as effective as the high dose, but with fewer side effects,” he says.

Dandona asked J. David Spence, MD, professor of neurology and clinical pharmacology at the Robarts Research Institute at the University of Western Ontario, the first author of the new paper, to further analyze the data to look at the lower doses.

Spence, who has focused his research on the prevention of stroke, then asked Dandona to join as a co-author.

The IRIS study demonstrated that pioglitazone not only reduced the cardiovascular complications, but also reduced the progression of prediabetes to diabetes, Dandona says.

“Since most of the patients in the study were treated with the high dose of 45 milligrams daily, which has frequent side effects of weight gain and edema, it was important to reanalyze the data to focus on the effects of the two lower doses (15 and 30 milligrams daily) of the drug, he says.

“The IRIS study reanalysis clearly demonstrates that while the two lower doses provide cardiovascular protection similar to that of the higher dose, the side effects of edema and weight gain are significantly lower.

“A more frequent use of this drug at lower doses in diabetes and prediabetes by physicians would contribute to significant improvements in glycemic control and cardiovascular complications,” Dandona adds.

Furthermore, since pioglitazone is a generic drug, it is inexpensive compared to insulin.

“Hence, pioglitazone must be used prior to insulin, especially since subcutaneously injected insulin has no protective effect on cardiovascular complications,” Dandona says.