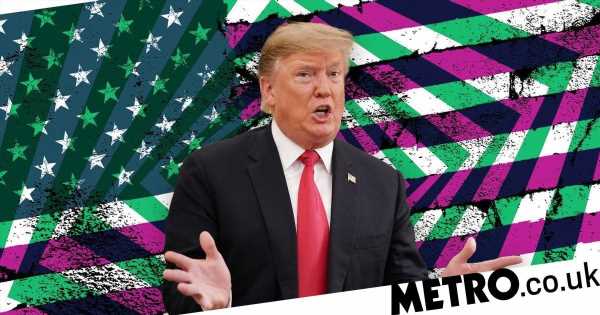 The president of the United States has made headlines since he stepped into the White House, from claims he said ‘black people would never vote for him because they were too stupid’, to bragging about grabbing women by the ‘p***y*’ and controversial tweets that regularly get him into trouble.

Most recently, as of just a few hours ago, he lashed out at London mayor Sadiq Khan and tweeted that he is a ‘stone cold loser’.

Whether positive or negative, it’s undeniable that Trump has a huge influence in world politics – and it’s affecting people. In preparation for his visit, thousands of protesters have gathered in London to object against him being allowed into the country.

But does this go beyond political allegiances? Could it be that Donald is causing more than controversy, and actually affecting people’s mental health?

Is there such a thing as Trump anxiety?

‘The thing with Trump is that he is everywhere, he’s omnipresent – especially this week in the UK and he’s using social media to its fullest,’ psychologist Jan De Jonge tells Metro.co.uk.

‘Trump is like the presidential version of Jeremy Kyle: join the shouting match and let’s not worry too much about decorum.’

Jonge explains that mental health concerns around politics go further than problems with Trump – it’s about being able to put your trust in the person leading your country.

And, when not being able to look up to this person, we feel ‘helpless’.

‘One factor causing anxiety (to various degrees) is the threat we experience to our sense of “right and wrong”,’ he said.

‘We want to, and need to be able to, look up to figureheads and the exemplary behaviour we expect of them.

‘When these figureheads, to many of us, lose their credibility whilst nevertheless retaining their positional power, we feel more helpless and more anxious.

‘The impunity with which these figureheads are treated can deeply disturb the average person (it does me!). Yes, it can cause depression and clouds some people’s lives; when people feel truth becomes unobtainable, people lose their nerve, their hope.’

‘When the (“duly elected”) president decides what is scientific evidence and what is fake news, which journalists are to be given access and credence, what war to fight, what wall to build, what tariffs to tout, the boundaries and overlap between ideology, beliefs, fact and spurious spin become vague and unfathomable.

‘It makes people feel they have less control and are powerless – even if they do vote.’

Unfortunately, it’s impossible to truly know how a leader will, er, lead his or her country before they are given the role.

Especially as many political campaigns are driven by budgets and candidates often spout promises that they believe will give them a higher swing in votes, regardless of whether they intend to follow through.

Some politicians also choose to remain quiet on their intentions altogether and instead give vague non-answers.

Connor Mitchell, consultant at Tyto and former PR advisor to John Mills, one of the Labour Party’s biggest financial donors, tells Metro.co.uk that it is exactly this – Trump’s lack of strategy – that is worrying and anxiety-inducing.

‘His [Trump’s] political techniques and general modus operandi have certainly never purveyed any clear sense of a carefully considered strategy, nor do his decisions strike of originating from the kind of well-reasoned debate that befits any influential leader,’ said Connor.

‘Instead, his actions can be likened to that of a shotgun going off madly in all directions. They constantly leave us thinking…what next? What could he possibly do now?

‘Given diplomatic relations can be set back decades by something as seemingly insignificant as a misconstrued gesture or a poorly worded comment, Trump’s erratic behaviour on a near daily basis is enough to leave anyone on edge.’

This isn’t the first time Trump anxiety has been raised as a real issue. In a poll by Stylist magazine in 2016 (when the US elections took place) 90% of the almost 2,000 people who participated said they were ‘terrified’ by the results.

Ruth Kudzi, a business mentor and mindset coach who has a master’s degree in psychology, tells Metro.co.uk that the reason politics (and Trump) affect our mental health is because we associate it to our view of the future.

‘Yes, anxiety often comes when we are not in control of the situation and we have fear around what will happen,’ she said.

‘Because Trump’s views are so extreme, they can trigger us as they make us feel unsafe which then means anxiety can develop.

‘We can catastrophise what will happen especially if we don’t have control and don’t understand the reasons why things are happening.’

If you’re unsure whether you’re suffering from anxiety, here are some of the symptoms, according to Ruth.

If the idea of Trump in the UK is making you feel anxious or the political landscape overall is causing you mental health concerns, don’t worry.

There are ways to lessen the impact and manage your anxiety.

If you work in politics or in an industry that is closely connected to it (or indeed has to report on politics) and feel anxiety hitting you in the office, it’s worthwhile stepping away from your desk, going for a quick walk or making yourself a cup of tea to distract yourself.

You may also find it useful to schedule a regular mindfulness session during your day. Also, avoid checking social media during your morning commute and give yourself that time to relax your mind.

‘See your anxiety as an understandable response to a situation you find threatening, so use some self-validation,’ Dr Elena Touroni, a consultant Psychologist and co-founder of The Chelsea Psychology Clinic, tells Metro.co.uk.

‘Anxiety is a normal aspect of being human. If you feel it is getting out of control, make sure that you focus on external events in your life that matter to you, live your life in a way that is consistent with your values and goals.

‘The main aim isn’t to eradicate anxiety but to live life embracing it as a normal emotion that will ebb and flow and ensure you don’t avoid anything because of it, but also that you don’t engage in activities that reinforce it.’

There is no one-size-fits-all way to manage anxiety; try a few different approaches and see what works best for you – whether that’s talking to a friend or family member, getting regular exercise, trying cognitive behavioural therapy (CBT) or immersing yourself in a new hobby.

If politics especially is a trigger, perhaps try to step away from it all for a while.

And if it’s Trump especially who is rubbing you up the wrong way, remember – he’s leaving on Wednesday.

You can contact the Samaritans for free from any phone on 116 123.

Alternatively, email [email protected] or go to samaritans.org to find details of your local branch where you can talk to one of the trained volunteers face to face.