A 50-year-old Indonesian man fractured his penis during ‘vigorous’ sex with his wife, doctors have revealed.

The unidentified man, who attended hospital on his own, complained that his penis had been swollen for four hours.

He told doctors he had been having sex with his wife when he felt his penis ‘crack’ — causing him to immediately lose his erection and start bleeding from his urethra.

Writing in a medical journal, experts said he was in ‘extreme’ pain and unable to pass urine.

Doctors who examined the man’s ‘urological emergency’ described it as looking like an eggplant — purple in colour with a bend resembling that of the vegetable. 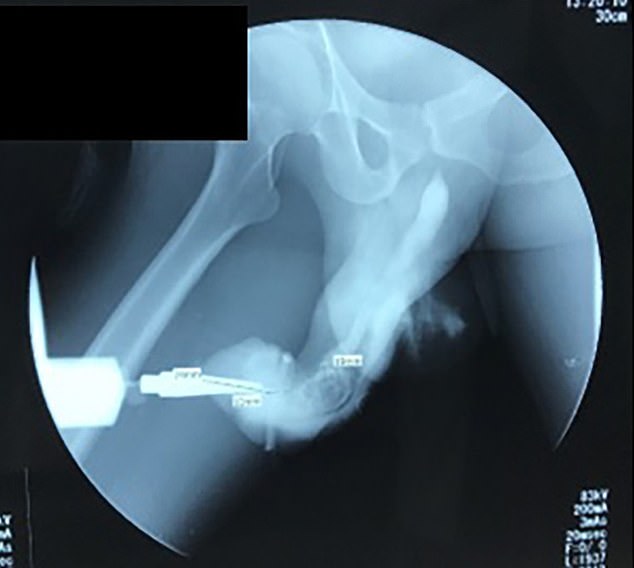 Researchers noted that in half of cases, a gruesome cracking sound can be heard. Four in five male victims lost their erection.

Those who have already been traumatised from breaking their penis are often left with erectile dysfunction problems and a lifetime of painful sex.

Blood flows into corpora cavernosa that runs along the penis and making it hard during an erection.

The trick to stopping penile injuries is to thrust quite shallowly, according to sex expert Tracey Cox.

Holding your partner close to you using a grinding rather than thrusting motion will also reduce the risk, she told MailOnline.

They believe the patient was having ‘vigorous’ sex that saw his penis slam against either his wife’s perineum or public bone.

Describing the case in the International Journal of Surgery Case Reports, doctors explained that he was rushed into to an emergency operation within two hours of arriving at the Dr Soetomo General Hospital in Java.

Medics ‘degloved’ his penis skin to reveal the damaged tissue underneath.

This revealed that he had ruptured his urethra, along with the erectile tissue in his penis and his Buck’s fascia — the tissue, blood vessels and nerves around the penis.

Doctors repaired the damage and the man spent five days in hospital, with a catheter — a flexible tube used to empty the bladder — that was left in place for three weeks.

Hospital staff removed the device 21 days later and subsequent urine tests — which measured how quickly he passed urine and the volume released — were normal.

Four months after the ordeal, the patient ‘had no serious complaints’ and was left with only a ‘minor’ bend in his penis.

He was able to urinate and have sex without discomfort.

The medics said penile fractures are an uncommon injury, usually suffered during sex, that can be diagnosed from a physical examination and a patient’s medical history.

They said surgery should be performed ‘as soon as possible’ and within 24 hours to avoid complications.