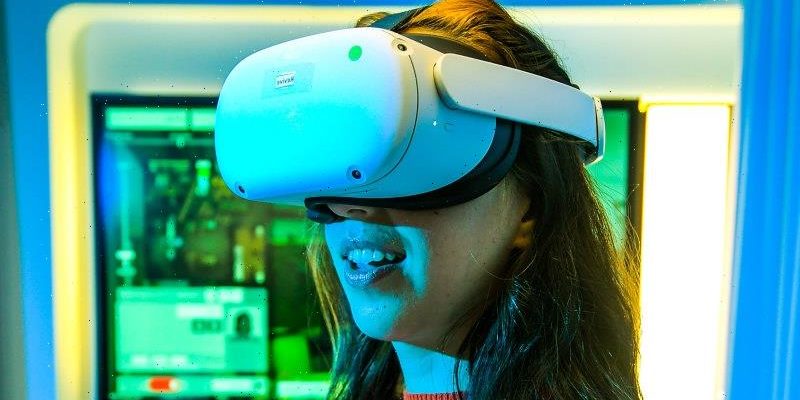 I walk into a crowded virtual cafe. At a nearby table, a man in a navy shirt looks up and peers at me over the top of his sunglasses. I feel the hairs prickle on the back of my neck – this man’s stare feels malevolent, and he is making me a bit paranoid. I realise I have frozen on the spot.

Psychologist Dr Roos Pot-Kolder’s voice in my ear gently steers me to the counter, where an avatar with a pink crop top and surly expression takes my coffee order. My card is declined, triggering traumatic memories of the time my payment was rejected when I was exiting a car park, holding up the line of impatient, honking cars behind me.

In real life, I am standing in a gleaming virtual reality lab at Orygen, the national centre of excellence in youth mental health in the Melbourne suburb of Parkville, wearing a headset that projects three-dimensional images onto a screen.

Researchers at Orygen are testing a number of virtual reality interventions for young people with complex mental health challenges. It’s a completely immersive experience. To demonstrate the technology, they have transported me to this daunting cafe, where sunglasses guy gives me the hairy eyeball and my credit card is declined.

The virtual world was co-designed by young people with experience of mental ill-health.

“We are building this for people who are socially avoidant,” Pot-Kolder says. “One of the things young people mentioned in workshops was that they would like to be able to hang out with friends, to order a coffee, use a public restroom in a crowded area, things like that. So, we can work on any of those scenarios in a live role-play.” 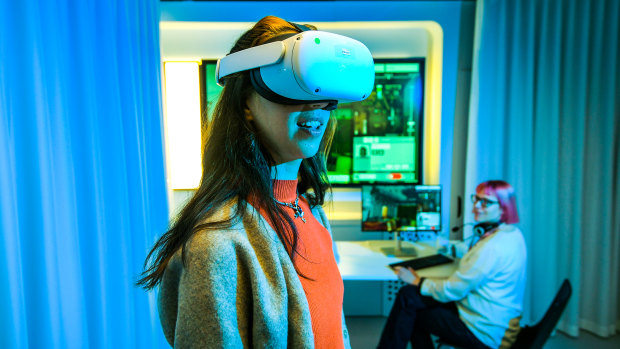 Exposure therapy, which was pioneered in the 1950s, involves transporting someone to the source of their anxiety – such as someone with a social phobia of going to a cafe – to help them overcome their fear. The idea is that the person will gradually become desensitised and break the pattern of avoidance.

Virtual reality exposure therapy has allowed people to first face things they find traumatic – such as social situations, flying or going to the top of a high-rise building – in the simulated world with the guidance of a psychologist.

But Professor Andrew Thompson, the director of Orygen Digital’s virtual reality research team, says there has been surprisingly little research focusing on young people. He says there is enormous potential for virtual reality to bridge the gap between the real world and the clinician’s room. 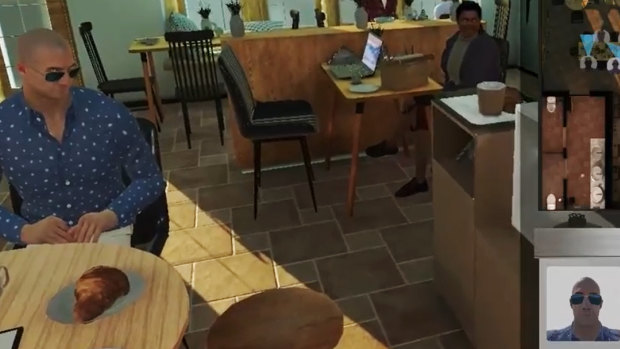 “We are extremely proud to be pioneers in this virtual territory to better the mental health of all young Australians,” he says.

If a person was freaked out by the weird guy in the sunglasses, Pot-Kolder might ask to think about what triggered their reaction. Was it the eye contact or the sunglasses? “Maybe start a bit further away from the guy. But let’s see what happens if we just keep looking at him. Or maybe what happens if you even eventually go have a chat with him?”

In most scenarios, Pot-Kolder will make the avatars in the cafe behave in a friendly or neutral way, which she says replicates most real-world experiences. It could turn out, for example, that sunglasses dude is a nice guy with an eye infection, which is why he is wearing sunglasses. “So if you are afraid of a person, it is probably not necessary,” she says.

But there is another level – known as overexposure – where everyone in the virtual cafe is hostile. “If you can manage that in VR, for sure, you can manage one or two people having a bad day in the real world.”

Pot-Kolder once treated a woman with social anxiety who avoided supermarkets after a random man approached her while she was shopping and called her fat. 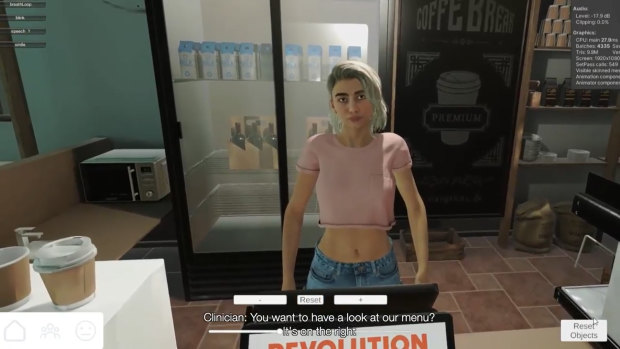 The barista in the virtual cafe program.

“This is something that 99.9 per cent of the time wouldn’t happen, but there are – sorry for the word – arseholes in real life. So, you would want to practise that usually people are neutral or nice. But if you encounter an arsehole, how are you going to deal with that?”

Pot-Kolder and the woman rehearsed how she would respond to the insult. They then recreated the scenario in a virtual supermarket. “She ended up going for ‘Well, have you looked in the mirror?’ We had a laugh about it. She felt him doing this said something about her, but actually this is saying something about this man. Like, who the hell does that?”

She says the lessons learned from the simulated world are then transferred to the real world.

Pot-Kolder, a world leader in the use of virtual reality for psychosis treatment, will this year lead a national trial aimed at young people at ultra-high risk for psychosis, who are experiencing social difficulties, such as avoiding others.

She will guide participants through social situations in realistic virtual environments – such as the cafe – to help them recognise psychosis triggers and symptoms and learn how to better manage them.

“If social stress goes up a bit, for example, in the busy cafe, we often have people say their hallucinations increase as well,” Pot-Kolder says. “Now we can practise managing hallucinations together.”

The lab has also developed Orygen Virtual Worlds, where young people with mental health difficulties can meet and interact with each other via an avatar, and another virtual reality program, MIND, which allows young people with depression and anxiety to get inside their own 3D virtual minds.

In a virtual classroom, for example, they can select a relevant thought, such as “I am a failure”, select a 3D shape for the thought, and then pop it as it appears in a game environment.

“A lot of the skills that we try to teach young people to deal with symptoms like depression, anxiety, and negative thoughts and emotions are quite difficult to explain,” Bell says.

“So we’ve recreated those environments in the VR, and then we actually teach them the skills and have them practice in this engaging, kind of gamified way.”

Get news and reviews on technology, gadgets and gaming in our Technology newsletter every Friday. Sign up here.