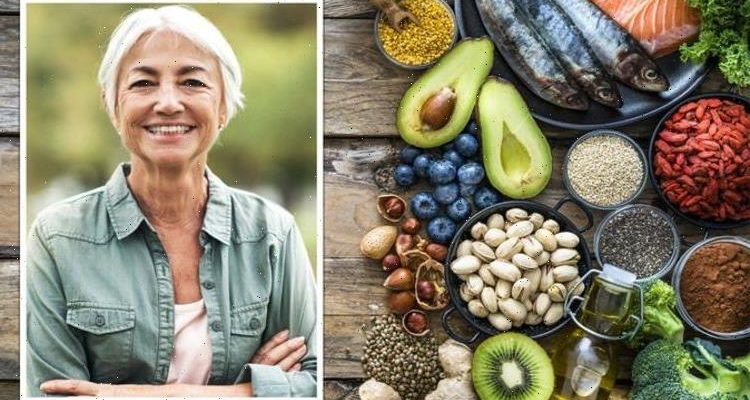 A simple and logical approach to boosting longevity is to delay and prevent disease. Therefore, adhering to a healthy diet is arguably one of the most important determinants of lifespan. Mounting evidence shows low consumption of saturated fat and high consumption of fatty acids could prevent illness. Three foods in particular, when consumed in high amounts, could slash the risk of early death by 10 percent.

In a new study, researchers have established that eating large quantities of nuts, seeds, and plant oils cut the risk of early death.

The meta-analysis, published in the British Medical Journal, found that plants rich in omega-3, such as soybeans and flaxseeds, had particularly strong protective effects against cardiovascular disease.

The team determined that a higher intake of alpha-linolenic acid (ALA), which equates to around 1.6 grams a day, could cut the risk of all-cause mortality by 10 percent, compared to those who ate smaller amounts.

ALA is the most common essential polyunsaturated fatty acid available in plant sources.

READ MORE: Cancer: The sign in your urine warning you have ‘the most serious type of cancer’

The nutrient is also essential for normal human growth and development.

Death from heart disease was also lower among people who ate smaller amounts of ALA-rich foods.

In fact, ALA reduced the chances of dying from cardiovascular disease by eight percent, which researchers explained would equate to 33 fewer deaths each year.

Previous studies had already linked it to a lower risk of cardiovascular disease, but none had determined its effects on all-cause mortality.

Heart disease is one of the world’s leading causes of death, accounting for a quarter of all deaths in the UK.

The researchers determined that for every 1 gram of ALA consumed, the risk of dying from cardiovascular disease fell by five percent.

Since the study was only observational, researchers could not determine the actual effect of ALA on health improvements.

Conversely, the researchers found the nutrient increased the risk of cancer in some cases. However, they added that further research was needed to confirm this.

They hypothesised that the protective effects of ALA may be owed to its ability to reduce cholesterol and blood pressure.

It is particularly abundant in flaxseeds and flaxseed oil, canola oil, soybeans and soybean oil, walnuts and walnut oil.

The researchers concluded: “Dietary intake of ALA was associated with a lower risk of mortality from all causes.

“We found a significant inverse association between blood levels of ALA and risk of all-cause mortality.

“Further studies should examine the association between ALA and a wider range of causes of death to provide a more comprehensive assessment of the potential health effects of ALA as well as to examine whether specific foods rich in ALA are differentially associated with mortality from cancer and other causes.

The findings come on the heels of a recent study published in the journal Circulation, which found that eating about half a cup of walnuts every day for two years could lower bad cholesterol – or low-density lipoprotein.

The protective effects of omega-3 are well known, with substantial evidence showing it is particularly protective for the brain.

What’s more, several studies have upheld the association between intelligence and higher consumption of omega-3 fats.