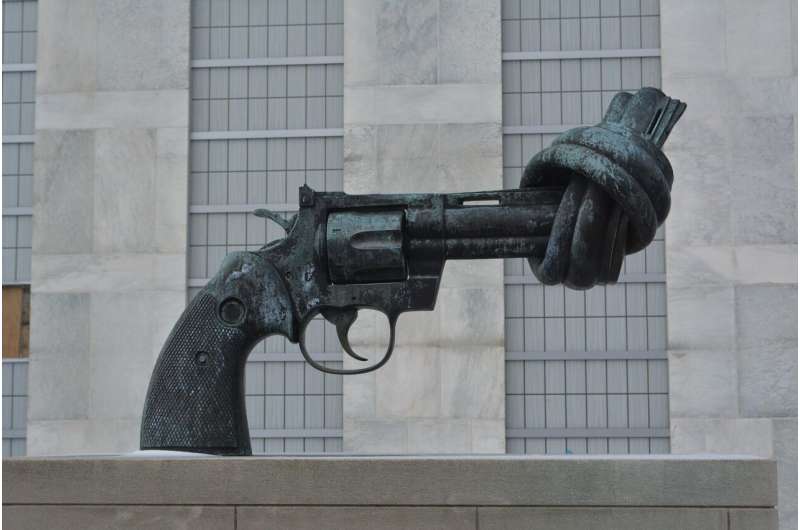 Agonizing questions are being raised by the recent tragic shooting incident in Buffalo, New York, where 18-year-old Payton S. Gendron is alleged to have shot 10 people dead and wounded three. As in the recent years’ similar acts of horror at a synagogue in Pittsburgh, a Walmart in El Paso, and a mosque in Christchurch, New Zealand, people want to know how such senseless acts of violence can even happen, why they happen so often, and whether anything can be done to stem their dreadful tide.

An easy answer has been to shunt the discourse over to mental illness as the cause and in this way marginalize the problem and identify a ready, if superficial, solution to it: improving mental health. It also absolves the rest of society of responsibility to address a pernicious trend of mass shootings that between 2009 and 2020 claimed 1,363 lives in the U.S. alone, more than anywhere else in the world.

The idea that committing atrocities and killing innocent victims reflects mental illness has been long discarded by terrorism researchers like me. The over 40,000 foreign fighters who joined the Islamic State organization to kill and die weren’t all mentally disturbed, nor were the mass shooters who in the first 19 weeks of 2022 managed to carry out nearly 200 attacks on U.S. soil.

There is a mental and psychological dimension to the problem, to be sure, but it is not illness or pathology. It is the universal human quest for significance and respect—the mother, I believe, of all social motives.

I am a psychologist who studies this ubiquitous motivation and its far-reaching consequences. My research reveals that this quest is a major force in human affairs. It shapes the course of world history and determines the destiny of nations.

It also plays a major role in the tragic incidents of mass shootings, including, it seems, the Buffalo killings.

This quest for significance and respect must first be awakened before it can drive behavior.

It can be triggered by the experience of significant loss through humiliation and failure. When we suffer such a loss, we desperately seek to regain significance and respect. The quest for significance can also be triggered by an opportunity for substantial gain—becoming a hero, a martyr, a superstar.

Both circumstances appear acutely in adolescence, during the momentous life transition between childhood and adulthood, marked by soaring hormones, turbulent emotions and gnawing uncertainty about one’s self-worth. Gendron is 18; most school shootings were carried out by young people between 11 and 17 years old, although the average age of mass shooters is 33.2.

Yet, neither age nor the quest for significance alone can explain the occurrence of mass shootings. After all, the vast majority of adolescents go through their teen years without resorting to murderous violence. What is it, then, that tips the scales for those who don’t?

‘Shortcuts to fame and glory’

The research my colleagues and I have done suggests that a crucial factor in turning a person into a mass murderer is the significance-promising narrative—essentially, a story—that individuals come to embrace. This story acquires its powers of persuasion through the support of the individuals’ social network, the group from which one seeks approval.

The mainstream narrative that most of us follow promises significance and social worth as rewards for hard work, notable achievements and social service.

Yet there exist alternative narratives that offer tempting shortcuts to fame and glory. These identify an alleged villain, scheme or conspiracy that threaten one’s group—race, nation, or religion. The mortal danger being invoked calls for brave heroes willing to sacrifice all on the altar of the cause.

A striking example of such a narrative is the so-called “white replacement theory” that Gendron allegedly embraced. It is the idea that progressive leftists are planning to flood the country with people of color, aiming to disempower the white population and destroy its values and way of life.

The sense of existential danger this theory invokes fuels blind hatred against the alleged usurpers, and presumed conspirators, a loathing that overrides all restraints. It unleashes the rawest, most primordial impulses of which the human reptilian brain is capable. Murderous rage and mayhem are often the result.

In 21st-century America, such toxic narratives not only proliferate but increasingly gain legitimacy and currency within public discourse. Some politicians are quick to recognize the seductive appeal of these ideas, particularly in times of widespread, significance-threatening uncertainty engendered by creeping economic inequalities, the pandemic, inflation and other destabilizing problems.

The wide availability of social media platforms exacerbates the problem by orders of magnitude. In the not-so-distant past, those with heinous views would need to look hard for similarly minded others. But these days, no matter how deviant or morally abhorrent their beliefs, people have no trouble finding soulmates on 4chan, 8chan or Telegram.

This technologically based predicament, and the primitive appeal of violence as a path to significance, make the problem of violence in our public spaces particularly difficult and unlikely to respond to quick solutions.

I have studied this appeal to violence for decades, and I believe that to conquer it requires first understanding the psychology that drives it all. It requires parents to appreciate the dread of insignificance their children may be experiencing, their quest of proving themselves worthy and how the combination of human needs, narratives and networks can produce murder.

It also requires educational and community institutions to provide youngsters idealistic alternatives to violence, to quench their thirst for mattering.

It requires attention to social justice and economic inequalities that leave millions feeling disrespected and left behind. And it requires resolutely confronting hateful narratives, and our demonization of one another.