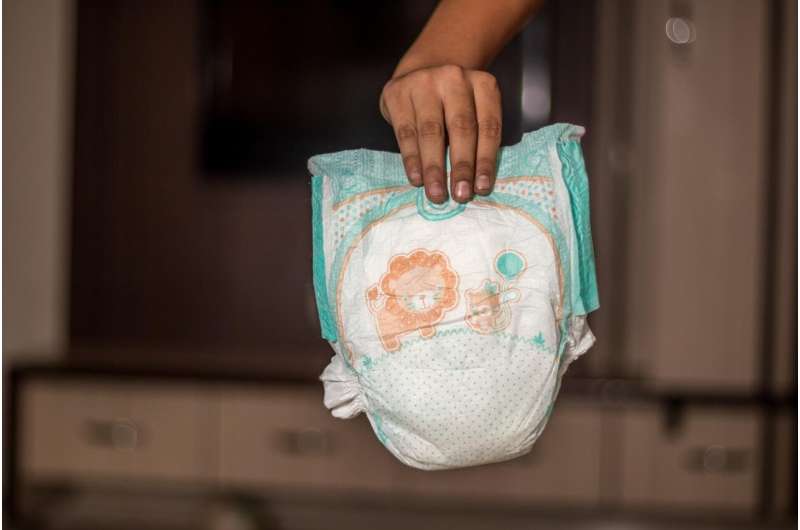 During the first year of the COVID-19 pandemic, more than a third of Massachusetts households with a child under five didn’t have enough diapers to change their child as often as needed, according to our survey. A baby without enough diapers might have more doctor visits for diaper rash and urinary tract infections. But we also found a link between diaper need and other concerns, like depression and chronic illness, that are less obvious and seemingly unrelated.

Our data for this study came from an online survey of Massachusetts residents led by The Greater Boston Food Bank from October 2020 and to January 2021. Food bank epidemiologist Rachel Zack and data analyst Nick Birk helped us compile, analyze and interpret the survey data.

We looked at more than 3,000 responses from participants in the food bank’s survey. Of those, we selected the 353 respondents who reported having a child age four or under using diapers. We then asked them specifically, “If you have children in diapers, do you ever feel that you do not have enough diapers to change them as often as you would like?”

We found that 36% of families with young children went without enough diapers during the pandemic.

But diaper need is about more than bare baby bottoms. We found that in households with the greatest diaper need there is also a greater likelihood of other significant concerns. For example, we found that people who reported diaper need were also more likely to report symptoms of depression or living in a home where someone had a chronic illness.

Previous research has highlighted the stress of needing but being unable to get diapers for a baby. The link between diaper need and chronic illness adds substantial evidence that households dealing with health issues are more likely to struggle with other hardships like food insecurity and unmet medical needs.

Diapers are an essential child care need and a significant expense for families with young children. The National Diaper Bank Network defines “diaper need” as “lacking a sufficient supply of diapers to keep an infant or child clean, dry and healthy.” The group estimates that the average cost of a month’s supply of diapers is US$80–$100. Public aid programs for families with low incomes generally do not provide diapers.

We had previously identified links between diaper need and food-related hardship. Our newer study sheds light on the situation during the COVID-19 pandemic and brings more income-related findings, such as the fact that diaper need is more common in households where someone lost a job. We also found more need for diapers in households with a 2019 income of less than $50,000 than in those with higher incomes. Speaking of income, our findings show that pandemic diaper need persisted despite most U.S. households’ receiving federal economic stimulus payments and diaper banks’ expanding distribution. Without these factors, there might have been more families in the state without enough diapers.

We used mathematical weighting to get data representing the Massachusetts population. But we haven’t yet looked into diaper need in other states or nationally.

It’s also not yet clear what the most effective solutions are for families lacking enough diapers for their babies. We have not measured the effectiveness of diaper banks or other diaper distribution models. Legislation proposed in Massachusetts would create a diaper distribution program or give qualifying families $30 to purchase diapers each month.

Congress also has considered creating federal funding for diaper distribution programs, in 2019 and again in 2021. And in February, lawmakers proposed allowing families to cover the cost of diapers with health savings or flexible spending accounts. If these programs become reality, studying their impact and effectiveness could prove useful.