Those of us who work to improve the lives of people who use drugs were unsure when Premier Gladys Berejiklian chose Professor Dan Howard to head the Special Commission of Inquiry into the Drug ‘Ice’.

In retrospect, the choice of Professor Howard should have given us hope: He is a lawyer, teacher and scholar and a former president of the NSW Mental Health Review Tribunal. He helped establish the NSW Mental Health Commission and the review of the Mental Health Act. He is a man of compassion and deep intellect with a history of taking on important issues where society’s stigmatisation of those affected meant the need for reform was neglected. 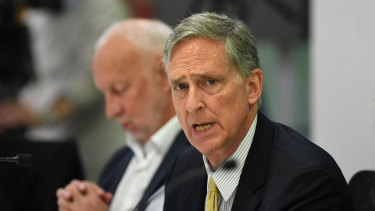 Commissioner Dan Howard speaks at the NSW inquiry into ice. HIs report is due out on Tuesday. Credit:AAP

When the Premier gave the professor the extension of his terms of reference to explore drugs other than ice, we gave a silent cheer. The report from Professor Howard, due today, is long-awaited by those who want to see reform in the systems we use to reduce drug use, harm and deaths.

The recommendations of Counsel Assisting the Inquiry late last year gave a tantalising snapshot of what may be to come. Encouragingly, they include that drug use should be considered a health and social issue; the decriminalisation of personal use/possession of all drugs; adequate resourcing and distribution of treatment centres; a NSW drug action plan; a dedicated minister and ministerial advisory group; and a trial of substance safety testing.

It is unclear how many of these recommendations, which we believe form a strong and comprehensive blueprint for reform, Professor Howard will suggest.

What we do know is that as he toured NSW, particularly the bush, he heard time and again from people who use drugs, their families and friends, and experts in the field.  He was told how easy it was to get drugs and how hard it was to get treatment. He heard of the deaths, and the significant effects on the health of the living. He heard how hard it was to function as parents and members of society. And how drugs affected users' housing status, financial well-being and relationships with loved ones.

We also know the government’s response to drug use is ineffective and not evidence-based. According to the Australian Institute of Health and Welfare, in 2018 Australia recorded 1740 drug-induced deaths, almost two-thirds of which are attributable to opioid use. This represents nearly five drug-induced deaths a day. The UN says the rate of death by population in Australia and New Zealand due to drug use is 2.5 times the global average. More than 136,000, or 1.2 per cent of hospital treatments, are principally caused by drug use and according to the Medical Journal of Australia, fewer than half of people seeking treatment for alcohol and other drugs can get access to it.

We also know the Premier, despite her strong public stance against pill-testing, sits at the helm of a state that has embraced significant elements of drug law reform. The trial of amnesty bins at music festivals is the most recent example. Before that, there had been a trial of infringement notices for possession offences; discretionary cautions for cannabis possession; the use of early warning systems about particular drugs; the Drug Court; Magistrates Early Referral into Treatment Program; trials of alternatives to methadone treatment; and the Uniting Medically Supervised Injecting Centre (MSIC) at Kings Cross, to name a few.

We know and love the people whose lives the Special Commission of Inquiry can touch. We support the Uniting Church in its mission to be a bold voice for a world that is fair and equitable and to build a just and compassionate community. We do this through our work in the community, the Fair Treatment campaign, and the operation of Uniting MSIC.

We continue to call for more extensive reform, but the train has left the “just say no” station and there’s no going back. The Premier has shown she is not scared of making hard calls on tough issues in the past. Let’s hope she listens to Professor Howard.

Emma Maiden is head of advocacy at Uniting.