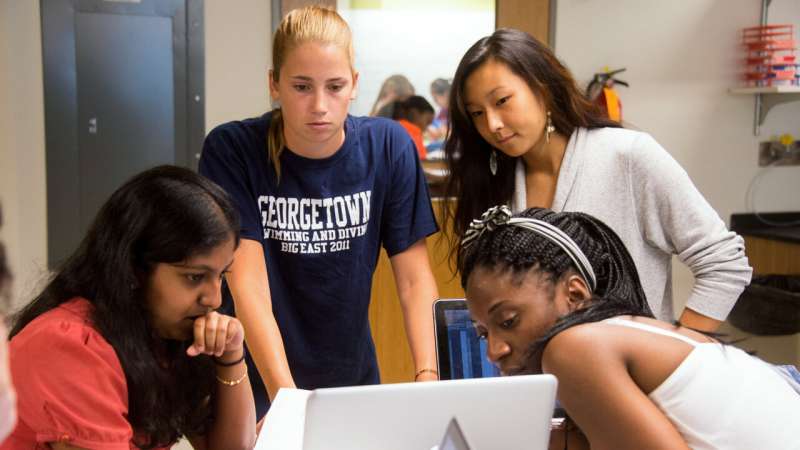 The traditional tests and grades that educators have long used may measure learning less accurately than scans of the brain, according to a new study published in Science Advances. The paper, authored by a team of researchers from seven universities and led by Georgetown neuroscientists, could not only upend how educators craft curricula, but reveals a hidden link in the human mind.

“For a long time, psychologists and philosophers have debated whether spatial thinking, like mental images of objects, is actually hiding underneath thinking that seems verbal,” explains Adam Green, the study’s senior author and Provost’s Distinguished Associate Professor at Georgetown College of Arts and Sciences in the Department of Psychology. “If this is true, then teaching students to improve their spatial thinking skills should boost their verbal reasoning ability.”

The researchers studied a “spatially-enriched” science course offered at public high schools in Virginia that emphasizes spatial thinking skills, like building maps and planning how cities can be reconfigured to reduce energy consumption. Magnetic Resonance Imaging (MRI) scans showed changes in students’ brains as they learned the course curriculum, and these changes were compared to the ways that learning is traditionally measured (e.g., changes in test scores).

The brain changes were far better predictors of learning, especially a kind of learning called “far transfer,” which is so deep that it helps students succeed at tasks they weren’t even taught to accomplish. Far transfer is something of a holy grail for educators and notoriously difficult to capture with traditional tests.

Making models in the mind

The team’s findings support Mental Model Theory, or MMT, which posits that when humans comprehend spoken or written language the mind “spatializes” this information, relying on systems in the brain that originally evolved to help our primate ancestors nimbly navigate complex environments.

“These findings demonstrate that mental modeling could be an important basis for far transfer in real-world education, taking skills from the classroom and applying them more generally,” says lead author and Psychology Ph.D. student Robert Cortes (C’18, G’23). “This study not only informs our understanding of how education changes our brains, but it also reveals key insights into the nature of the mind.”

“Verbal reasoning is one of the most powerful tools that human evolution has produced,” Cortes argues. “It is incredibly exciting to combine neuroscience and education to better understand how the human brain learns to reason. Hopefully we can leverage these findings to improve human reasoning more broadly.”

Showing new evidence for MMT in the brain, the research team found that improvements in verbal reasoning could be best predicted by changes in centers of spatial processing in students’ brains—specifically in the posterior parietal cortex.

Creating curriculum for the cranium

While the debate about mental models has a long history, one of the hottest debates in the modern educational landscape is whether neuroscience can improve teaching and learning in schools. Though promising in theory, efforts to integrate neuroscience with education have proved challenging in the real world. One of the major obstacles is that neuroscience tools, like MRI scans, are expensive and time consuming, making it unlikely that they can be applied at the large scale of education policy and practice.

“We can’t scan every kid’s brain, and it would be a really bad idea to do that even if it was possible,” says Green, who is also a faculty member in the Interdisciplinary Program in Neuroscience.

Critics have long expressed concerns about whether the data that neuroscience provides can really tell educators anything they couldn’t find out using traditional paper and pencil or computer-based tests.

The research team’s new findings point to a new way of integrating neuroscience with education that helps to overcome these challenges. Instead of focusing on each individual student’s brain, the study focused on the curriculum the students learned. The results show that brain imaging can detect the changes that come with learning a specific curriculum in real-world classrooms, and that these brain changes can be used to compare different curricula.

“Curriculum development can and does happen at the kinds of small scales that neuroscience can realistically accommodate,” Green says. “So, if we can leverage neuroimaging tools to help identify the ways of teaching that impart the most transferable learning, then those curricula can be widely adopted by teachers and school systems. The curricula can scale up, but the neuroimaging doesn’t have to.”

Students in the spatially-enriched curriculum showed more robust brain changes compared to closely matched students who took other advanced science curricula. These changes appear to indicate a deep learning of spatial abilities that the brain can apply in highly flexible ways, which may not be fully captured by traditional tests of specific skills. In particular, the study’s finding that brain changes can predict learning better than traditional tests provides strong evidence that the inside view afforded by neuroscience can give educators insights about far-transfer learning that they have long sought but that traditional learning assessments often miss.