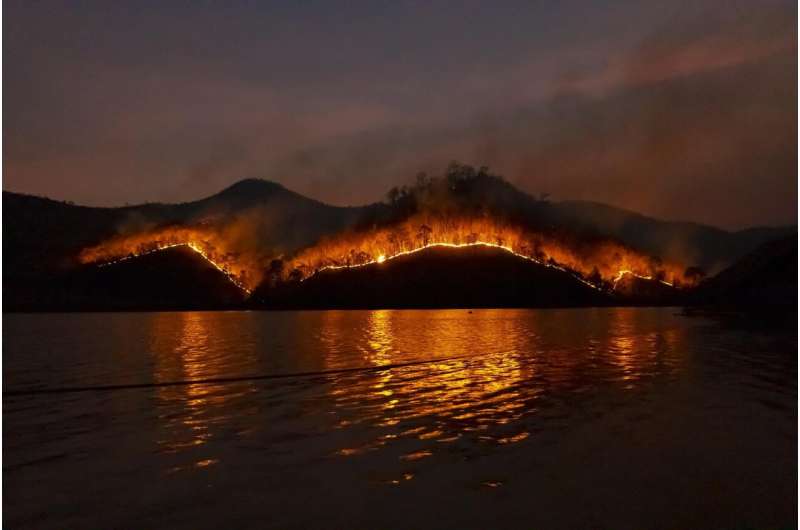 When Anabel Garcia got home from her job tending to grape orchards in Sonoma County, California, she noticed her saliva was black.

During wildfire season, Garcia and her fellow migrant farmworkers were sent out to salvage wine grapes before they became tainted from the smoke. Garcia and her coworkers experienced shortness of breath and weren’t given protective attire, instead wearing just bandanas to cover their nose and mouth.

“It was very hard to breathe, and our eyes hurt. After the next few days, we could feel it in our lungs,” Garcia, 42, said in Spanish through a translator. “We were getting sore throats and spitting dark matter.”

Garcia doesn’t have a primary care doctor or medical benefits. She said she goes to a mobile health clinic “only when I’m in real need of it.”

“What the owners cared about most was the grapes. It makes me angry because nobody called us after to check in on us,” she said.

During that summer of 2017, the mother of two from the Michoacan region of Mexico said she and the other workers weren’t compensated for working in smoky conditions.

Farmworkers are an understudied population, yet vulnerable to certain health risks and barriers during wildfires, which are being exacerbated by temperature-revving climate change that’s increasing their frequency, according to research from the University of Washington and others.

That’s why Michael Mendez, an assistant professor at the University of California, Irvine’s School of Ecology, launched a study with the National Center for Atmospheric Research this summer aimed at finding out health risks facing California Latino, Latina and Indigenous migrant farmworkers like Garcia during wildfire season.

For the coming months and into next year, the researchers will study data from air quality monitors and analyze how they translate to farmworker health risks.

“When a wildfire disaster was striking, particularly in agricultural areas, these farmworker communities were being disproportionately affected,” Mendez told U.S. TODAY. “These individuals have been living in the region for years, if not decades, but they were rendered invisible in the context of disaster policies.”

While recent measures have been put in place, Mendez and advocates say there is still a long way to go, in Sonoma County and elsewhere, to protect agricultural workers’ health and understand their unique exposures.

Through the study, Mendez hopes to fill in gaps and data to inform policymakers.

“Wildfires don’t happen in isolation,” he said. “Wildfires occur in massive heat waves, which we’re experiencing now, as well as drought and other types of environmental hazards. A more comprehensive approach and holistic approach needs to be looked at how to safeguard the most vulnerable and essential workers.”

Wildfire smoke is a health hazard, and farmworkers are ‘more at risk’

Wildfire smoke and pollution in general are linked to health problems, and farmworkers can lack access to regular health care, said Joan Casey, an environmental epidemiologist and assistant professor at the Columbia University Mailman School of Public Health.

“The things that we absolutely know are linked to wildfire smoke are adverse respiratory outcomes and cardiovascular disease outcomes. We’ve seen that time and again, across many different states. And that’s generally among the general public, people who will be far less exposed than people that work outside,” Casey said. “Farmworkers who aren’t receiving care… if they have an underlying comorbidity that’s untreated, they would be more at risk of, for example, a cardiovascular event during a wildfire.”

Other research groups have also been studying the issue and trying to fill in gaps.

The researchers estimated pollutant concentrations in wildfire smoke will intensify in Northern California as well as agricultural regions in the Central Valley and along the coast, with a 35% increase in smoke exposure days for farmworkers.

“Several counties in central California with large numbers of agricultural workers will experience an increase in the frequency of smokewave conditions,” wrote lead author Miriam Marlier, an environmental health professor at the Fielding School of Public Health at the University of California, Los Angeles, and her colleagues.

Agricultural workers aren’t always told how to protect themselves

California farmworkers aren’t alone, and extreme heat is only adding to unsafe working conditions during harvest and fire season in the Western U.S., experts say.

Farmworkers throughout Washington state shouldered heavier heat and pollution exposures during wildfire season, according to a study published in the Journal of Agromedicine last year, led by Elena Austin, assistant professor at the University of Washington’s environmental and occupational health sciences department.

Counties with the most agricultural workers had hotter temperatures and high exposure levels of dangerous particulate matter, a harmful, complex mixture of inhalable pollutants. These levels peaked during summer and wildfire season when the farmworker population is at its largest, Austin and her colleagues found.

In a small 2018 pilot study that surveyed local field workers, about 3 in 4 farmworkers in Mattawa, Washington, reported exposure to an unhealthy level of smoke on the job during wildfire season, yet said employers made no changes to their routines, according to the survey by the university’s Pacific Northwest Agricultural Safety and Health Center.

All the farmworkers in the study said they received little to no information on how to protect themselves from the smoke from managers—their preferred source of information. Less than half used a mask, and most used a bandana.

“Those people we interviewed actually did not have a good sense of actions that they could take to protect themselves,” Austin said.

“There are gaps in these rural areas, which could potentially create a difficulty in determining exposure in for field workers,” she said. Her team is working with other groups to deploy sensors, which must be calibrated and maintained over time.

There are also few Environmental Protection Agency sensors in areas of concern, NCAR atmospheric scientist Rebecca Hornbrook told U.S. TODAY. Her team will instead use data from the many purple air monitors in the area.

“It’s basically a community resource,” she said. “It’s a dense network. You can get a lot more spatial distribution from using those than you can from some of the more sporadic EPA sensors.”

Back in Sonoma County, Anayeli Guzman, a Oaxacan farmworker from Mexico, said she and her coworkers were told it wasn’t dangerous to work.

“We were told that it was OK to work because the fires were far away,” she said through a translator. But, Guzman added, “It was really difficult to breathe.”

Like Garcia, Guzman said she doesn’t have a doctor to regularly visit.

“We don’t have access to regular checkups… to understand exactly how our health is,” she said. “There’s anger, there’s sadness and there’s a certain sense of impotence that we aren’t taken into account.”

The county’s Board of Supervisors recently approved an wildfire evacuation zone program run by the local sheriff’s office, according to local media reports. While advocates are celebrating it as a win, they are also ambivalent about law enforcement running the program. Many of the migrant farmworkers are undocumented.

“For a worker who associates the sheriff’s office with deportations and evictions and police brutality, that’s not the place you can really lodge complaints,” said Davida Sotelo Escobedo with North Bay Jobs for Justice, who called the new measures a “powerful victory” but one that needs to “continually improve.”