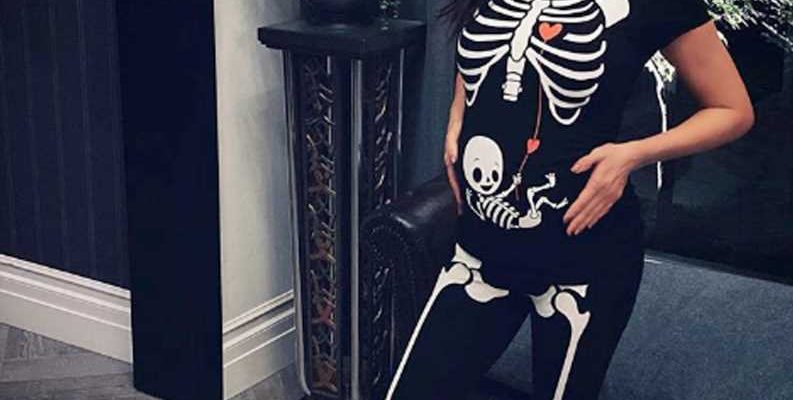 To get in the spooky spirit, the dancer, 38, put on a special costume which included the couple’s first child together.

The 44-year-old actor showed off his girlfriend’s outfit on Instagram Thursday with a clever caption about Dewan’s growing belly.

“Things that go ‘bump’ in the night!” he wrote of Dewan’s skeleton costume, which featured a baby skeleton in her stomach. “My 44th Happy Halloween🎃 and Baby Kazee’s first,” he continued.

The Tony winner, who celebrated his birthday on Oct. 30, also used his post as a thank you to those who sent him well wishes.

“Thank you all for the birthday wishes yesterday. Best. Birthday. Ever,” he said.

The Step Up actress made sure Kazee felt loved on his special day by writing him a sweet note on Instagram alongside a series of photos.

“The world became a better place the day you were born…Your strength, gentleness, humor and caring beautiful soul touches everyone who knows you. I am the luckiest girl in the world to love you and be loved by you❤️ Happy birthday @stevekazee!” Dewan wrote, also adding “(You’re going to kill me for the last shot sorrrrry).”

Dewan and Kazee announced their pregnancy news in late September, telling PEOPLE exclusively, “We are beyond overjoyed and couldn’t be happier to be expanding our family!”

This will be the first child for Kazee and the second for Dewan, who shares 6-year-old daughter Everly with ex Channing Tatum.

While one fan questioned if a detail on a recent photo Dewan posted hinted at her having a girl, the celebrity explained that she’s even “keeping the secret from [herself]!”

“But I was not trying to tell … it was not a gender reveal, and I saw a lot of people ask me that and I was like, ‘I didn’t even think about that,’ ” she said of a maternity photo which showed her cradling her belly under a pink ribbon tied into a bow.

The couple was first linked in October 2018, six months after she announced her split from ex Channing Tatum.

Dewan recently opened up to PEOPLE about their romance, explaining how they reconnected after a brief meeting years earlier.

“I wasn’t looking for it,” Dewan said. “But it sort of took me by complete storm. It happened when I least expected it.”

“I had met Steve years ago in a flash, it must’ve been five minutes,” she recalled. “I saw him perform in Once on Broadway and I was just totally blown away by his talent. My mom was with me, and we got to go backstage and meet the actors. He just had a cool [energy] about him.”

She added: “Obviously I was married and so we never spoke or saw each other again for six years, but I never forgot the moment. And then six years later, obviously it becomes public knowledge that we’re separated and he contacted me.”