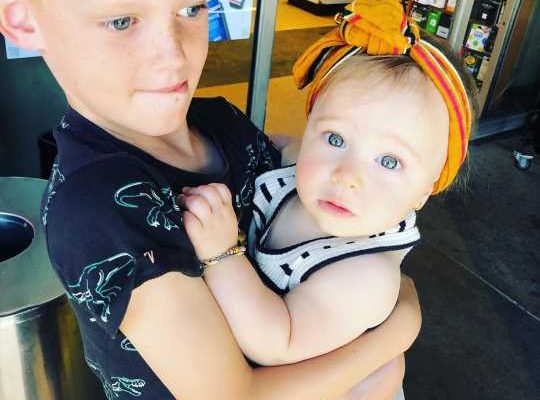 Hilary Duff can’t help but swoon over her adorable children.

The 31-year-old actress and mother of two posted an adorable Instagram picture of her 7-year-old son Luca and 9-month-old daughter Banks Violet on Monday, with their piercing blue eyes in focus.

“My babies with their baby blues,” Duff wrote, alongside the photo of Luca holding his baby sister, who the actress shares with fiancé Matthew Koma.

“Isn’t it so much easier letting him take her food shopping while we watch Game of Thrones?” Koma jokingly commented on Duff’s Instagram post.

Duff and her fiancé, 32, welcomed Banks in a home birth in October of last year before getting engaged this past May. Duff shares Luca with her ex-husband, Mike Comrie.

The happy new parents were first romantically linked back in early 2017 but broke things off a few months later before eventually getting back together in September 2017.

The Younger star often shows off her children on Instagram, with recent posts documenting the young family enjoying Memorial Day weekend and the Fourth of July together, as well as trips to the beach and every little moment in-between.

While Luca initially was “on the fence” about having a baby sister prior to her birth, the two have since become nearly inseparable, with Duff’s Instagram posts showing him bottle-feeding her, kissing her on the head, and as well as on the cheek.

“Banks Violet Bair this little bit has fully stolen our hearts! She joined our world at home on Thursday afternoon and is absolute magic,” Duff wrote in an Instagram post following the little girl’s birth.