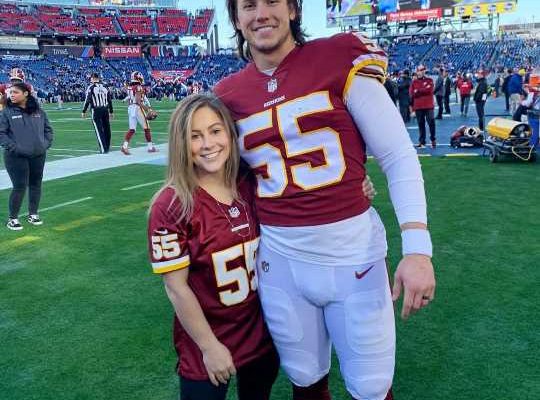 Shawn Johnson East‘s baby on the way doesn’t need to go for the gold — she and her football-player husband Andrew East will be happy regardless of whether their first child is an athlete.

Although, as the 27-year-old former Olympic gymnast tells PEOPLE, “I don’t know how our baby won’t be competitive because of our competitive nature.”

Johnson East’s stardom first rose when she clinched four medals during the 2008 Summer Olympics with the U.S. women’s gymnastics team in Beijing, and it continued to soar as she won her season of Dancing with the Stars in 2009, after famously missing her prom to compete on the show.

Meanwhile, long snapper East, 27, has played for several NFL teams including the Oakland Raiders, Seattle Seahawks and, most recently, the Washington Redskins.

“We have both comedically joked that so many people expect our baby to be an athlete that they’ll probably be an artist or a musician or something,” says Johnson East, “which we’re totally good with.”

The couple first announced that they were expecting in April (a year after revealing they’d suffered a miscarriage) in a sweet Instagram photo shoot.

Having been very open about their fertility struggles in the past, the couple recently posted videos on their YouTube channel about their pregnancy complications. At a 20-week checkup, their doctor informed Johnson East that her baby had underdeveloped and dilated kidneys, as well as a two- rather than three-vessel umbilical cord, which carries an increased risk of stillbirth and pre-term labor.

“We still have the two-vessel cord, which is something that my body decided to do on its own, so we have to monitor that. I go in every three or four weeks for ultrasounds, just to make sure the baby is getting enough nutrients and growing. But so far, so good, and we celebrate every day,” Johnson East tells PEOPLE.

In a video posted after her 20-week appointment, Johnson East said that the whole experience has given her some serious perspective.

But during this phase of her pregnancy, the first-time mom-to-be isn’t worried about those aspects.