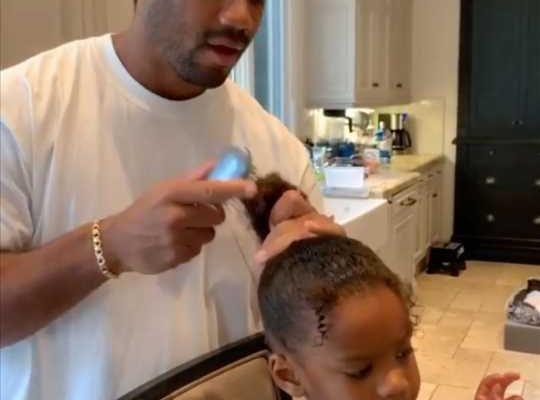 From Seahawk to stylist, Russell Wilson can do it all.

The 31-year-old NFL quarterback recently proved his prowess when it comes to doing hair, brushing and pulling his 3-year-old daughter Sienna Princess' locks into a ponytail in a video shared by Ciara over the weekend, as the little girl sat patiently in their kitchen.

At first, Sienna (who wore a sweet pink dress for her styling session) didn't seem to fully trust her Dad, putting her hands on the top of her head before grabbing a bottle of product and saying, "Daddy, put this on!"

Wilson insisted they didn't need it, though, and eventually wrangled a pink hair tie from his daughter. Dodging her little hands, the athlete managed to secure her curls into a perfect updo — which earned a big smile from Sienna.

Ciara — who is pregnant with the couple's second child together, a son — recently posted an emotional message to her 6-year-old son, Future Zahir, focused on expressing hope and positivity that he will one day experience a change in racial equality and justice following the death of George Floyd.

"My sweet Baby Boy. I pray that when you get older A CHANGE will finally have come!!" the "Goodies" hitmaker wrote. "I'm going to keep my FAITH! I'm praying that the losses of our Black Kings and Queens won't be in vain."

In the wake of Floyd's death at the hands of former Minneapolis police officer Derek Chauvin on May 25, many stars have used their platforms to decry racial injustice and police brutality. In a powerful video message shared over the following weekend, Beyoncé encouraged her fans to continue to raise their voices.

"We need justice for George Floyd. We all witnessed his murder in broad daylight. We're broken and we're disgusted. We cannot normalize this pain," said the singer, 38. "I'm not only speaking to people of color — if you're white, black, brown, or anything in between I'm sure you feel hopeless by the racism going on in America right now."

Jamie Foxx shared his own video in which he featured photos of the many black lives that have been lost in recent years, and later revealed that he'd brought his children to a protest in support of the Black Lives Matter movement.

"We cannot be silent anymore," wrote Foxx, 52. "We have to change policy when it comes to police brutality … push for real change!! We cannot let all of these black folk down."

To help combat systemic racism, consider learning from or donating to these organizations: