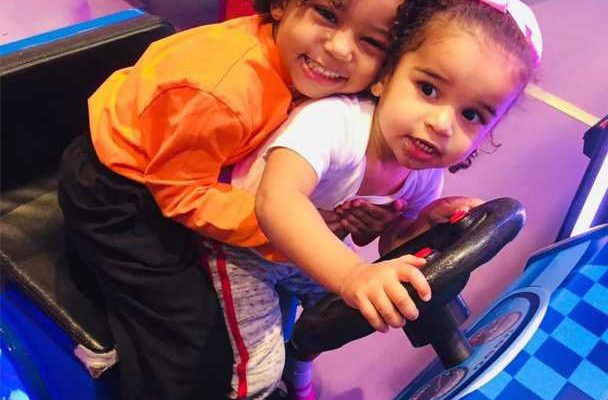 Dream Renée Kardashian and Saint West are cousins, and they’re the best of friends!

On Sunday, Kim Kardashian West shared a tribute to her 3-year-old niece with a series of adorable photos of Dream and Saint, who turns 4 on Dec. 5.

“Happy Birthday sweet Dreamy! We all love you so very much!” the mother of four captioned the photos on Instagram. “Going through my phone and see so much of you and Saint makes my heart so happy that you all are so close and have each other 💕.”

In several of the heartwarming photos, Saint and Dream can be seen lovingly embracing one another in the sweetest hugs.

Earlier in the day, Dream’s dad, Rob Kardashian, posted his own slideshow of photos that showed his daughter taking a celebratory helicopter ride for her birthday.

In the images, Dream, who’s dressed in a casual set of matching grey sweats, stands in front of the helicopter while holding a cupcake covered in sprinkles, while another shot shows the birthday girl smiling while putting on a protective pair of headphones inside.

On Friday, Rob, Kim and their famous family had an intimate celebration for Dream. Also at the gathering were many of her cousins, including Kardashian West’s daughter Chicago, 21 months, and son Psalm, 5 months, as well as Khloé Kardashian’s daughter True, 18 months.

“Dream is very special to Rob’s family. She is the sweetest girl and everyone loves her. Of course, they wanted her to have a special birthday party with all of her cousins,” a source told PEOPLE.

Opening up about Rob’s relationship with Dream’s mother, Blac Chyna, the source added that the pair have been able to “co-parent better now.”

“Rob is a good dad. He is very protective of Dream. Things with him and Chyna have calmed down. They are able to co-parent better now. Both of them seem to just focus on what’s best for Dream,” the source said.

Kardashian West documented Dream’s birthday party on her Instagram Story, which was themed after one of the birthday girl’s favorite movies.

Showing off some of the party’s tasty treats, Kardashian West included a photo of Dream’s birthday cake, a colorful confection that appeared to be shaped like the same Trolls character that Dream dressed up as for Halloween this year.

Chyna had a separate party for Dream on Saturday, another insider told PEOPLE.