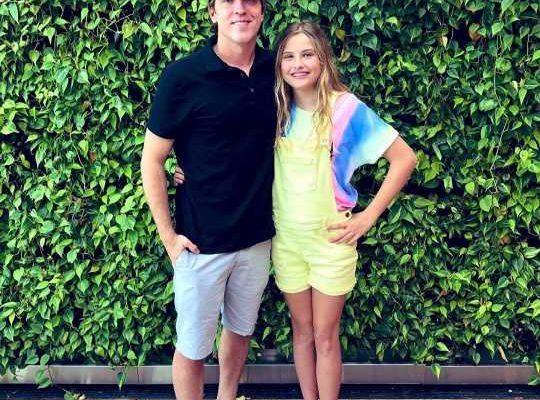 The late star’s 13-year-old daughter joined her dad Larry Birkhead for an upcoming interview with Daily Mail TV, where the proud father shared that she has quite the streak of natural onstage talent.

“I got an email from her teacher [that] said, ‘Dannielynn gave one of the most believable performances of the whole entire school that was in the play,’ ” says Birkhead, 46, who was interviewed by Daily Mail TV host Jesse Palmer alongside his only child at their home in Louisville, Kentucky. (Entertainment Tonight shared a sneak peek.)

“If she wants to do something like that when she’s older, I’ll have my own opinion about it,” he continues.

But in the meantime, Dannielynn finds it “really cool” to “act as a character and not yourself,” she says, adding, “It’s like portraying a new person. It’s fun.”

Palmer tells ET that in the full interview, “We catch up with [Dannielynn], her life, what her hobbies are, what it’s like growing up a daughter of a big celebrity. Her dad is raising her in Kentucky, trying to give her this normal life away from the spotlight.”

As far as how Smith is part of their lives at home, Palmer says, “There are some tokens throughout the house in her memory and in her honor. He talks with his daughter a lot about who her mom was [and] what she did.”

“So much of it is true, a lot of it is not true as well,” he adds, per ET. “And I think [he’s] trying help his daughter understand who her mother was in his memory of her.”

Birkhead, a photographer, has been raising Dannielynn as a single father in Kentucky following Smith’s death in 2007 from an accidental overdose at age 39, when Dannielynn was just 5 months old.

Though they mostly stay out of the Hollywood spotlight, the father-daughter pair makes one annual trip to the Barnstable Brown Kentucky Derby Gala in Louisville — the same party where Birkhead met Smith years ago.

In June, he shared three photos of the middle-schooler wearing a pink-and-white floral dress as she posed with her dad, flashing a huge grin and a peace sign as she held up Hamilton tickets in the third snap.

“Surprised Dannielynn with @HamiltonMusical tickets for 7th grade graduation,” Birkhead captioned the sweet snaps. “I think she is happy!”