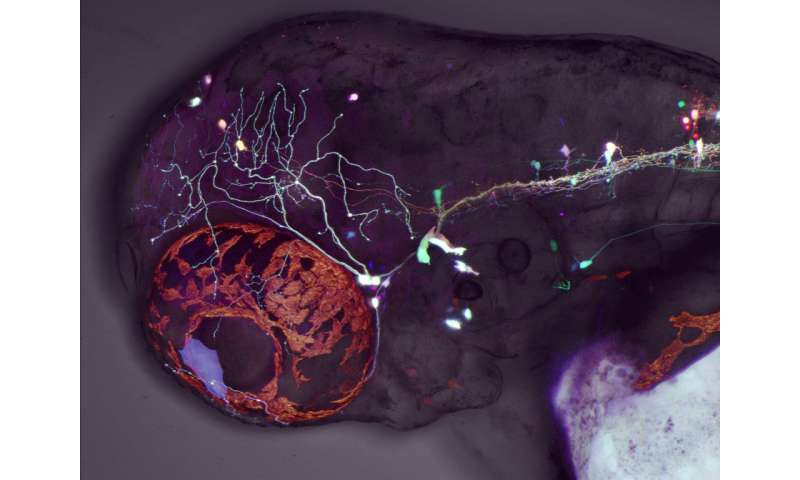 Researchers studying zebrafish have found that genes linked to autism spectrum disorder and other developmental brain abnormalities may be playing a role in people who cannot control their eye movements.

The findings, to publish this week in The Journal of Neuroscience—the official journal of the nearly 40,000-member Society for Neuroscience—underscore the importance of the Down Syndrome Cell Adhesion Molecule-Like 1 gene in the development of eye movements.

The study utilizes zebrafish as a model to investigate neural circuits underlying human eye movement disorders. In recent years, zebrafish has emerged as an important tool for biomedical research, providing insight into the pathogenic mechanisms of complex behavioral disorders.

“We can put zebrafish under a microscope, especially in the larval stage, and observe cells moving, eyes developing, and all kinds of exciting neuronal activity,” said Albert Pan, an associate professor at the Fralin Biomedical Research Institute at VTC, who led a multi-university team of investigators in the study. “Because people and fish share similarities in brain structure and genes, this simple organism provides us with an extraordinary window to understand the common neural pathway and brain activity patterns underlying eye movements.”

As vertebrates with many similarities in development and body plan, fish and people share many genes and proteins, including the Down Syndrome Cell Adhesion Molecule-Like 1 gene, called dscaml1 in zebrafish. In people, loss of this gene is one of many mutations that have been linked to autism spectrum disorder and malformations in the cortex of the brain. However, how dscaml1 deficiency may contribute to behavioral deficits had been mostly unknown.

By video tracking eye movements in the larval zebrafish, the scientists found that dscaml1 mutants have a host of eye movement deficits, including rapid fatigue, impaired visual fixation, and inability to perform a type of fast, ballistic eye movement called saccade.

Saccades are important for quickly shifting our gaze to different points of interest. Patients with developmental deficits in saccade generation (ocular motor apraxia) often have difficulty reading or performing other tasks that require frequent gaze shifting. The researchers further used a powerful imaging technique called two-photon calcium imaging to visualize neuronal activity in the living animal’s brain during saccades and were able to identify impaired neural pathways that correspond to the behavioral deficits.

The researchers said that many characteristics of the zebrafish dscaml1 mutants are similar to human ocular motor apraxia, and further research in the zebrafish model may lead to discoveries into complex diseases.